The makers of the microcomputer Raspberry Pi are about to shrink their product to be even more DIY-friendly in its upcoming iteration, dubbed the Raspberry Pi Compute.

Slated for release this June, the Compute model offers an even more bare-bones building experience than previous models of Raspberry Pi. It targets tinkerers looking for more flexibility in customizing Raspberry Pi’s hardware.

Raspberry Pi founder and CEO Eben Upton said he expects to see more industrial as well as consumer use of Raspberry Pi with the release of the Compute.

“[The Compute model] frees users to build products around the Pi, benefiting from our stable board support and leveraging our purchasing power for the core silicon components on the board,” Upton said in an email to VentureBeat.

The latest model leaves out the ports and connectors attached to Raspberry Pi’s previous designs. Instead, Raspberry Compute will only retain its processor, the Broadcom BCM2835 SoC, with 512MB RAM as well as built-in flash memory, all crammed on a 2.66-by-1.18 inch board. Like previous Raspberry Pis, this new microcomputer’s components are soldered to the board, so you can’t upgrade them.

This means that hardware hackers will be able to create their own printed circuit boards (known in hacker lingo as PCBs) to access the PC-grade processing power behind the Raspberry Pi for applications of their own. The compressed form factor makes it easier for hackers to accommodate the computer inside their own projects.

“Currently, you need a significant amount of space to accommodate the Pi inside a product, and a wiring loom to connect to the various ports on the board,” Upton said. “The Compute Module lets you accomplish this in a smaller space, with all signals routed on the carrier PCB.” 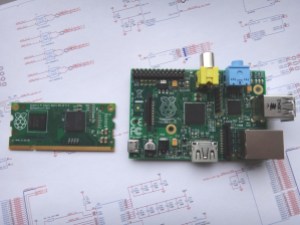 For those that are not technically or financially ready to cobble together a circuit board on their own, The Raspberry Pi Foundation is also planning to release a basic Compute Module IO Board to help kick-start any DIY projects. The Module IO Board will give you the capability to program the built-in flash memory as well as the necessary HDMI and USB ports to connect Raspberry Pi’s computing power to an entire system that can boot up in your OS of choice.

Upton said no plans to expand distribution for Raspberry Pi exist at this time.