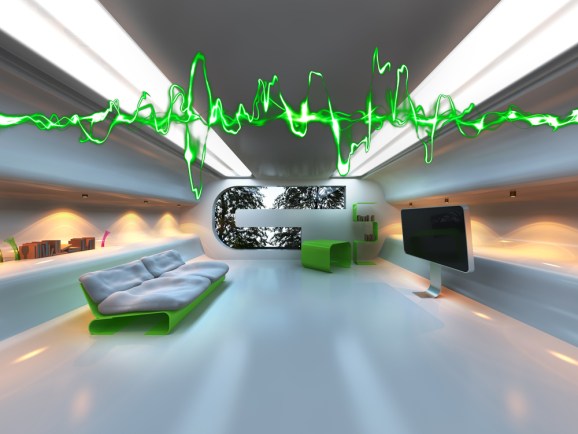 With so many device-specific intelligent voice agents out there, cheap transmitting microphones throughout your house or office could act as a universal voice interface talking to all of your things.

That’s the future painted in a new Forrester report about the next major step in voice control: continuous voice interaction. The mic units — with an analog-to-digital converter, a Bluetooth radio transmitter, and a rechargeable battery — would complement existing device-specific mics by separating the microphone from the device so they can be placed anywhere.

“By turning voice control into a device-bridging interface we call vox,” says the report, The Future of Voice Control Goes Far Beyond Dictation [behind a paywall], “we can go beyond current single-device inputs to create a persistent personal assistant available where the consumer is.”

“Voice control is the first step to extending the interface outside of the current model where inputs are directed to single devices,” Forrester media analyst and principal report author James McQuivey told VentureBeat.

The report envisions that the replies of this “vox service” will be based on its knowledge of your schedule and devices.

For instance, when you ask Vox to let you know when your next Macy’s bill is due, it knows you’re still in the house and the smartwatch on your wrist is the closest device to you, so the info is displayed there.

At first, Forrester predicts, Vox will listen for specific commands. But eventually it will operate in continuous recording mode. Like an observant mother, it would know when your conversation with your teenaged child sounds too stressed, so it recommends a self-help book on living with teens. Or it decides that your voice may indicate an oncoming neurological disease like Parkinson’s.

Sound creepy? McQuivey told us that the utility will outweigh the creepiness:

“Just as the first people who proposed passing electricity in wires around the neighborhood were considered crazy for exposing everyone to a potentially fatal technology, the first companies to propose listening to you all the time — and later, watching you 24/7 — will face opposition, but only until the exact moment when consumers realize that they get so much more than they sacrifice. That said, the smart money will be on the company that chooses to have much more stringent privacy and information controls than today’s platform providers have chosen to implement.”

While Forrester suggests any of the big digital platforms could build a Vox service, it sees one company as best positioned: Amazon.

Its huge retail power could make this Vox service worthwhile for users’ purchase decisions, and for Amazon, such a service would be a big sales driver. Plus, the company is already big into big data, cloud services, multiple device platforms, and a large human-based customer service.

So, are Vox units, a superlayer over platform-based voice agents, in our future?

According to at least one expert in intelligent agents, the answer is yes — and no.

Mikael Berner is CEO and co-founder of EasilyDo, a Google Now-like smartphone app for iOS and Android that organizes data and notifies you of important things, drawing on information from Evernote, Dropbox, Google Calendar, and other sources.

Yes, he said, consumers want a universal interface, such as through voice.

“But they already have their smartphones with them in the bathroom,” he said.

“The smartphone is the universal interface,” Berner said, “with much of the syncing [between different devices] being done between cloud services” and apps.

The key issue, then, doesn’t appear to be the acceptance or usefulness of a universal voice agent. Instead, why would anyone want to set up more mics around the house when they already schlep their phone with them everywhere?