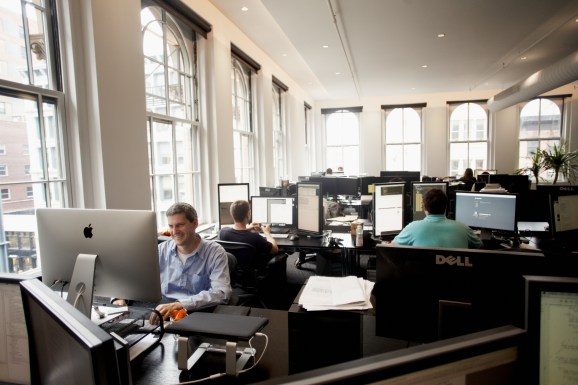 The Squarespace office in New York.

Back in 2003, Anthony Casalena just wanted a hosted blog with photo galleries and statistics. He was a college student, not an entrepreneur. But his plans changed.

“Instead of putting a Frankenstein [monster] together, I started building Squarespace myself,” Casalena, Squarespace’s founder and chief executive told VentureBeat.

The company he built has been growing and growing over the years, morphing from a simple content management system into a full-fledged platform with hundreds of thousands of customers, elegant stock site templates, automatic mobile site creation, e-commerce capabilities, and a content-delivery network.

Casalena wants to keep adding to it and making it more flexible, even as competitors like Automattic and Wix loom. A new $40 million funding round for Squarespace should help the company’s system become still more popular.

In terms of content-management systems and site-hosting services around today, Squarespace is “really unique,” Casalena said.

Sites based on open-source WordPress? They can get hairy as developers have to worry about patches, maintaining uptime, managing databases — “all the stuff that comes with being your own system admin,” Casalena said. And developers can be limited in terms of what they can do when they ask WordPress to host sites for free, he added.

How about sites based on open-source Drupal? It’s best for “heavily complex sites,” he said.

Photo-oriented Exposure? Casalena hasn’t had much experience with it.

But Squarespace? For customers like Cisco, Expensify, Sony, Target, and Wired, the service is just right.

Of course, the new money will allow Squarespace to add more features, although Casalena declined to provide much detail there.

One item of note: In the months to come Squarespace will promote its recently added Developer Center, which gives developers an expansive toolset for customizing the company’s pre-made front-end site templates. With support for Git repositories, it’s possible for multiple developers to work on a single site, too. And while developers work on a site, it’s free. Only when a site goes live do developers have to start paying for it.

“It could be big,” Casalena said. “It’s certainly a huge focus for us.”

General Atlantic provided the new money, which follows a $38.5 million round in 2010.

New York-based Squarespace officially started in 2004. It has 285 employees now, and it should employ around 400 people by the end of the year, Casalena said.