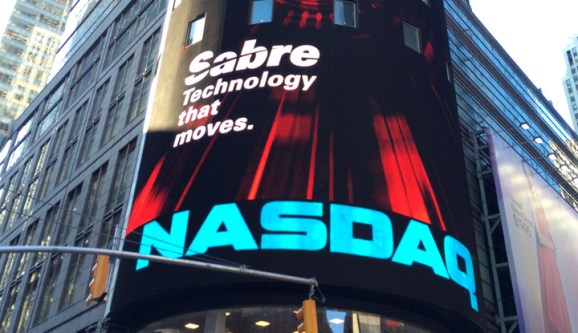 Travel software and data firm Sabre Corp. is back on the public market.

Six years after TPG Funds and Silver Lake Funds took the debt-ridden firm private for $5 billion, Sabre today debuted on the Nasdaq stock exchange. It priced its shares at $16 — below its expected $18 to $20 range — raising $627 million at a $3.93 billion valuation.

Sabre operates travel exchange website Travelocity, which accounted for 18 percent of the company’s $3.05 billion in revenue last year. It also operates the Sabre Travel Network, a business-to-business travel marketplace, and its Airline and Hospitality Solutions service, a cloud-based software business for airlines and hoteliers.

Despite five consecutive years of annual losses, Sabre is bullish on its future prospects.

Sabre transacts over $100 billion between travel suppliers and buyers each year — more than eBay or Amazon handles annually, Simonson noted. And if the company considered its cloud software business a separate company, it would be second in value only to Salesforce, Simonson asserted.

The company will use net proceeds from the IPO to help pay off its more than $3 billion in debt, Simonson said.

Sabre partnered up with once-competitor Expedia in August, letting that company use its technology to power Travelocity. That partnership enabled the company to cut costs and boost profits, helping it appeal to investors.

Shares of Saber are currently trading at $16.65, up 4.1 percent from their initial $16 sale price. The company is trading on the Nasdaq under the symbol “SABR.”

“In some ways, [the IPO] doesn’t change things a whole lot, because we’ve had terrific support from our owners, Silver Lake and TPG,” said Simonson.

“The innovation we’ve done over the last years — that’s going to continue.”