Back in January, doctors’ social network Doximity already had more members than the American Medical Association. Today, it’s announcing $54 million in new funding for its “LinkedIn for doctors.”

The social network helps medical professionals collaborate on patient treatment. “The fifth leading cause of death is medical mistakes. Communication isn’t as free flowing as it should be,” Doximity chief executive Jeff Tangney told VentureBeat in an interview.

Along with its communication features, Doximity also enables doctors to complete up to 20 hours per year of continued education through its partnership with the Cleveland Clinic. Doctors can read personalized articles and answer quiz questions to earn their credit.

Although the company is best known as a “LinkedIn for doctors,” it has added several features key to its user base since launch, including secure messaging, personalized reading and research recommendations, recruiting tools, and an accredited continuing education program. It aims to increase cooperation between doctors by simplifying and streamlining communication and networking between them through the site.

Since its last round of funding in 2012, Doximity has more than tripled its user base, with at least one in three U.S. doctors as members of the network — about 40 percent to be exact.

“For an early stage company, Doximity has demonstrated mature revenue and a clear path forward towards long-term success. Healthcare is not a niche, it’s a sector, and as a sector it’s incredibly large. It’s exciting to see Doximity bringing the best of social media to this significant market,” said T. Rowe Price Associates portfolio manager Henry Ellenbogen in an official statement.

The company says it plans to use the funding to continue to grow, especially to include other medical professionals such as nurses and to grow internationally. It also wants to continue to build out the product and fulfill more of their users’ needs, such as verifying and displaying credentials, which are a huge pain problem for doctors, the company said.

Doximity is one of the many “vertical networks” that have been emerging beyond the ubiquitous LinkedIn, from Edmodo for teachers to Avvo for lawyers and SpiceWorks for IT employees.

Interestingly, LinkedIn cofounder and current Earlybird Venture Capital partner Konstantin Guericke has been on Doximity’s board for about two years.

“One thing that was exciting [about Doximity] has been the fact that this really impacts the lives of people,” Guericke told VentureBeat.

Guericke also said that Doximity’s focus on a single industry allows it to build a product very tailored to that group’s needs, providing more value in areas more general networks such as LinkedIn cannot. Although he doesn’t believe LinkedIn et al. will go away, he does think professionals will be spending more and more time on their respective vertical networks.

Guericke also pointed to marketplace verticals such as Zillow for real estate and Elance for freelancers, which he believes offer better values than, say, general purpose marketplace Craigslist.

“Focusing on one area you can do a much better job,” he said.

Doximity is not the only player in the medical social network field. QuantiaMD, which launched in 2004 and has raised a total of $63 million, is also a social network for healthcare professionals aimed at increasing collaboration on difficult cases and learning from peers.

Doximity was founded in 2011 by Jeff Tangney and Nate Gross, and is based in San Mateo, Calif. This new round brings the company’s total to $81.8 million. 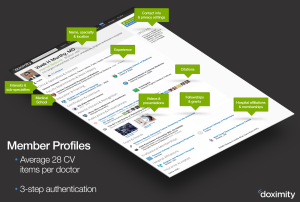 Above: How Doximity’s user profiles are designed to highlight the information most important to doctors.