Either it’s Christmas in May or App Annie really wants to win the mobile analytics battle.

The company announced this morning that it is releasing a free app store optimization tool that will help developers make their products more visible on the iOS app store and Google Play. And it also announced updates to its Advertising Analytic tools that help app publishers track monetization of their apps across more than 20 ad platforms.

Ad analytics is something App Annie has been working on for the past half year.

The problem the company is trying to solve is that app publishers are monetizing with multiple ad networks simultaneously, so it’s not always easy to see which networks are bringing in the best return. Our Mobile Games Monetization report found that the most successful developers monetize through the most number of networks — often up to 10 at a time. 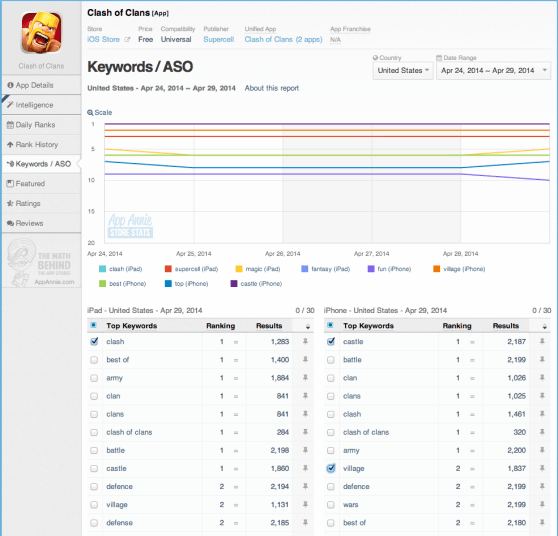 Above: App Annie’s app store optimization will show you where your competitors rank.

So App Annie’s ad analytics platform creates one central dashboard where developers can see all their networks and all their stats and compare them to find the best ones.

The challenge for App Annie, of course, is that while it currently supports “20+” ad networks, there are many more in existence. In fact, there are at least 85 that we gathered significant amounts of data on. And as we found, it’s the little guys that often bring in the bigger dollars — not the Googles of the ad world. So while 20+ is significant, it may not be enough for every developer.

The good news? Some of the top-monetizing networks on the planet are on the list, including Ad Colony and InMobi.

That’s ensuring that your keywords, your description, your icon, and all your metadata makes your app as discoverable via the app store search engines as possible, helping app developers get more native downloads (as opposed to paying for installs via advertising, incentivized downloads, and other costly methods.) 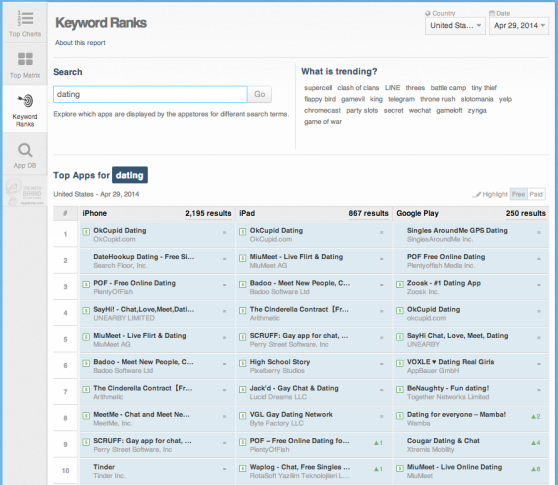 Above: You can also see which apps ranks for certain keywords.

With more than two million apps on Google Play and iOS, and 82 percent of users never searching past the first 25 apps, developers have a problem, App Annie says. In fact, according to its competitor Flurry, 60 percent of apps are never downloaded at all.

So App Annie’s new ASO tool analyzes your competitors as well as your own apps, discovers what you rank for and what you don’t, and makes suggestions for improvement. It can also provide an ordered list of apps that rank for a certain keyword, so you can see how far down the list you are.

The battle for app analytics is a fierce one, with competitors like Flurry, Distimo, and Localytics fighting App Annie and others for developer mindshare and the big data fruits of having their SDKs integrated into hundreds of thousands of apps living on hundreds of millions of devices, not to mention more private analytics and monetization suites such as that from Swrve.

This is just one more shot in a long, long battle.