Internet connections are overrated, says Open Garden. In fact, it’s even made an anonymous chat app that works both on and off the proverbial grid.

Today, the company announced it has released a new version of its FireChat app, which now helps users create group discussions around topics and communities of interest, even when there is no Internet connection available.

FireChat makes use of “mesh networking,” an approach that essentially creates peer-to-peer communication between devices instead of them connecting through traditional Wi-Fi in order to communicate. The iOS version of FireChat uses iOS 7’s Multipeer Connectivity Framework, which lets iOS 7 devices “[use] infrastructure Wi-Fi networks, peer-to-peer Wi-Fi, and Bluetooth personal area networks and subsequently [communicate] with those services by sending message-based data, streaming data, and resources (such as files),” according to Apple’s developer site.

“We asked ourselves, ‘Could social networks be like parties?’ This is a step in that direction. We aim to take anonymous mobile communications to the next level, providing relief to social networks fatigue and privacy concerns,” said Open Garden chief executive Micha Benoliel in an official statement.

The FireChat app to be particularly well-suited for situations such as festivals, public transportation, and entertainment venues with low connectivity. In situations where interacting with others is also important to the experience, it provides a way to do that even when there’s no Internet connection. This new version seems to be even more in line with the needs of people in these environments, as creating group discussions about the event is akin to attendees using hashtags on Twitter when attending an event.

Mesh networking is fast rising even in our Internet-on-mobile world, as we previously reported. The Internet used to be the tool for decentralized, anonymous, and citizen-based communication. However, with increasing concerns over Internet monitoring (read: NSA) and the need for more under-the-radar communication in certain other countries, it’s becoming a technology of huge interest to organizations such as the U.S. Department of State for example, which has become a major driver and funder of this technology.

Another messaging app also looking to make chatting completely untraceable and private is Wickr, which focuses on highly encrypted messaging.

FireChat is currently available on both iOS and Android, and the first version was originally launched on iOS in March with the Android version following in early April. FireChat’s maker, Open Garden, is an organization focused on net neutrality and is developing the Open Garden Mesh Protocol that optimizes communications between wireless devices and access to the Internet. Open Garden Mesh Protocol enables people to create their own network and to “become an extension of the Internet,” according to its website. 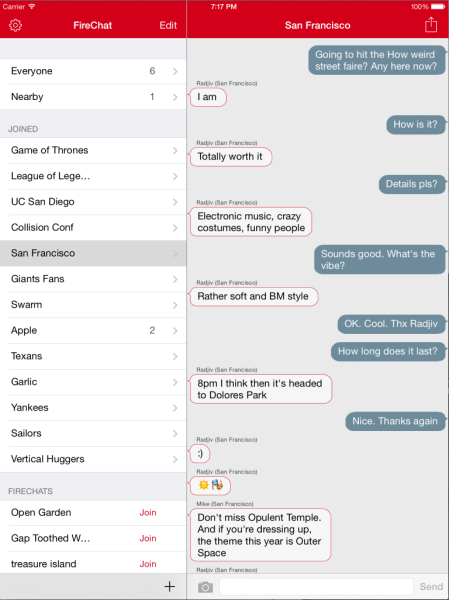