Comcast has been shelling out large sums of cash to Republican leaders in Congress, and the company’s efforts may be paying off.

The nation’s top political leaders rarely give much attention to the wonky regulatory battles of the tech industry. But embattled Speaker of the House John Boehner (R-Ohio) took time off from budgets and immigration reform to threaten the Federal Communication Commission over its proposal to strengthen net neutrality.

Following the Republican leader, all of the Republican party’s top brass (the majority leader, the whip, and GOP conference chair) signed on to a strongly worded letter (.pdf) to FCC Chairman Tom Wheeler.

Wheeler has hinted that he would reclassify Internet broadband as a utility, giving him more power to regulate Internet service providers, such as Comcast, who want to be able to charge more money for faster service.

It’s difficult to say how much money influences policy, especially if a politician personally opposes their donors. But fighting net neutrality fits squarely within the anti-regulation ethos of Republicans, so it’s easier for big donors to get their pet issue some attention.

According to OpenSecrets, Comcast gave about four times more money to Boehner than net neutrality supporter Google ($74,000 vs. $20,000). Indeed, Comcast is the third biggest donor to Boehner’s re-election campaign so far. 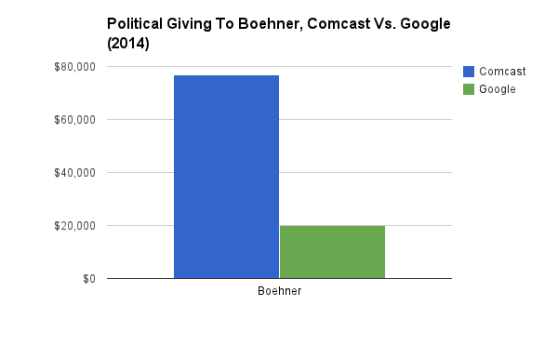 Boehner’s Democratic counterpart in the House, Nancy Pelosi (D-Calif.), has received a nearly mirror image of support from Comcast and Google ($7,500 from Comcast vs. $22,500 from Google). Democrats, by and large, have been stronger supporters of net neutrality, although Pelosi isn’t exploiting her leadership position to galvanize support for the cause. 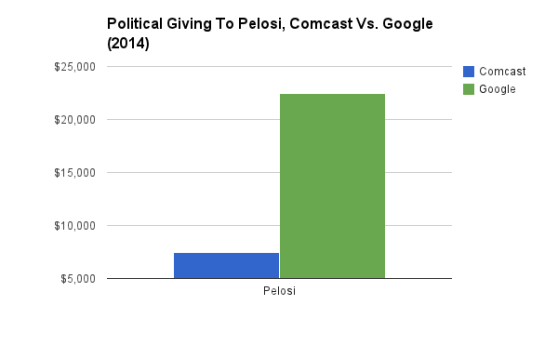 For the time being, net neutrality is in political limbo. Earlier this year, a district court struck down the current method of protecting net neutrality, leading to the fight over whether the FCC should reclassify it as a “common carrier” utility. Telecommunications companies have threatened to go to court and reduce investments in broadband infrastructure if the Internet is reclassified.

The new FCC chairman has to find a novel balance between Internet companies, telecoms, Republicans and Democrats — all of whom have a lot of money at stake.