Digg.com has again become one of my favorite news sources on the Internet. I find myself religiously checking it daily, if not more, for the latest great content from popular media outlets.

On Twitter, I mainly follow politics and tech geeks, so without Digg I never would have discovered a fascinating feature from Playboy magazine on an extreme survivalist baffling physicians with his ability to withstand pain and disease.

Digg.com, the once mighty news aggregator, was a digital force in news in the late 2000’s. Placement on the front page could mean being the topic of conversation du jour all around the Web. Raising $28.7 million was no sweat for Digg in 2008. At the time, it was one of the top content sites on the Web with more than 14 million uniques a month.

But cracks in its ranking mechanism, from ideological groups gaming ultra-conservative stories to the front page to the outsized influence of power users, caused serious problems. With traffic stalling, Digg completely redesigned the site around established media publishers. It was a disaster; traffic plummeted as users revolted. 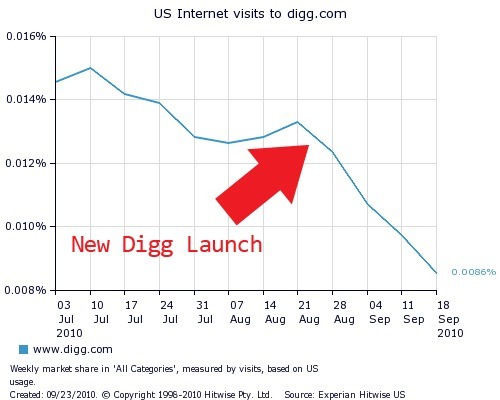 See, before Twitter, Digg was the only place to share a great story. But Twitter seemed like a better product for sharing. And the large base of users who liked Digg for uncovering stories from independent bloggers immigrated to competitor Reddit.com en mass.

But now, at least for me, Digg is once again proving to be an outstanding utility. Both Twitter and Facebook are echo chambers of my self-selected favorite news mavens.

Digg broadens my reach since the new user base does an admirable job of matching the most innovative stories of the day from a broad range of topics. You won’t see a report about a downed airliner or election result; rather, something like he New York Time’s interactive on rent vs. buy for prospective homeowners will rocket to the top. 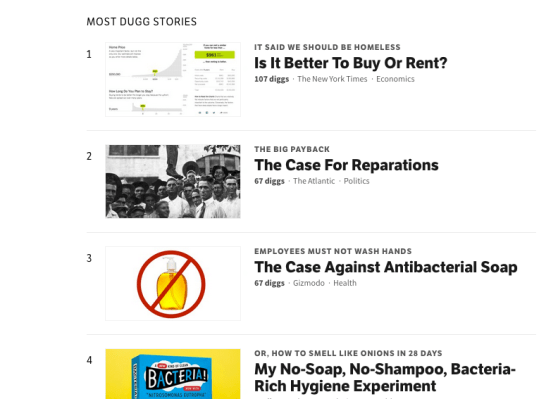 Digg’s “upcoming” stories are also lightening-quick: I learned about Wikileaks’ disclosure of Afghanistan as a target country for the NSA’s super-top-secret mass spying late Thursday night, even before it hit my Twitter feed.

Every content site has its personality, and Digg’s is decidedly wonky: it has a lot of love for Ezra Klein’s new policy news site, Vox.com, and for New Yorker features. So, if you’re the kind of person who loves a quantitative comparison of marijuana to other drugs, a first-person perspective of someone who escaped from a Himalayan cavern, or an undiscovered Google Maps easter egg, you’re going to like Digg.com.

In other words, if there’s something really interesting (as opposed to newsy) on the Internet, Digg.com is doing a pretty danm good job or surfacing and ranking it on any given day.

Is this enough to survive in the cutthroat world of the barely-surviving content industry? That will all depend on Digg’s ability to monetize. But, for users, Digg has something original and that’s no small feat. I once again check the site as much as I used to. Digg is back.