Mobile marketing company AppLovin has emerged from stealth, going from 0 to 300 paying customers in less than two years.

AppLovin’s platform is able to track consumers across multiple mobile devices, and by automating the buying process, AppLovin can attribute “revenue for every dollar spent on its platform,” according to marketing chief Katie Jansen.

“For the last two and half years or so we’ve been purposely just in stealth,” chief executive Adam Foroughi told VentureBeat. “The only people that really know about us are the people that work with us.”

“The reason for that,” he said thoughtfully, “is we just don’t feel like the ad tech world and marketing world is delivering a very compelling story to the consumer.”

There is little, if any, conventional dictum propelling the 60 member team that has recently opened offices in San Francisco and New York. They hired their first marketing team member only last year, eschewed raising cash from VCs, turning instead to angels and friends to raise the $4 million to launch.

(Note: Adam Foroughi and LivingSocial’s VP of Product will be on a session at our upcoming MobileBeat event to discuss how the popular deals site used AppLovin’s mobile marketing platform to create a “full funnel” campaign.)

“We have hundreds of advertising clients that we obtained through word of mouth,” Foroughi said.

The strategy seems to be paying off. From its Palo Alto headquarters, AppLovin is fielding 15 billion app requests a day, is eagerly competing “against” everybody in the mobile ad space, and is ideally positioned to be acquired by somebody like, say, Facebook, who is rumored to be interested.

For the record, Foroughi declined to comment on a possible Facebook buyout. He also demurred when asked about revenue, which a source told VentureBeat is “off the hook.”

AppLovin’s platform is a triple threat. It delivers attribution, targeting, and user acquisition. In the mobile ad space, many firms offer one or two of those but not all three simultaneously. 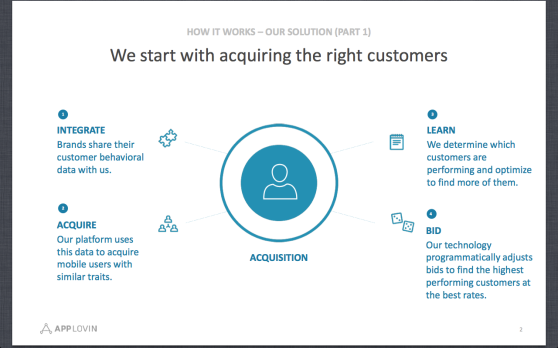 Mike Murphy is the former head of sales for Yahoo and Facebook. He spent five years at the latter and knows his way around the mobile space.

He came aboard AppLovin as an adviser to Foroughi and told VentureBeat the company is one of the “pure” players working in the mobile ad space today.

He said Foroughi spent so much of his time hunkered down working on the platform and with customers that he had to good-naturedly strong-arm the chief executive to focus on sales.

“We actually forced him to hire a sales team because he was spending so much time with clients,” Murphy said.

Murphy pointed out that once he saw the foundation AppLovin had built in so short a time, it was a no-brainer to join the team.

“Their technology is great. And the response from the marketplace made it a natural fit for me,” Murphy said.

The mobile advertising space is incredibly arcane and complex: It includes approximately 500 marketing firms, ad buyers, ad networks, ad targeters, and mobile analytics outfits, all aggressively vying for a piece of a market that totaled $17.9 billion last year, according to eMarketer.

Since launching in late 2012, AppLovin has signed up clients like OpenTable, Hotels.com, Spotify, and Groupon, among many others you’ve heard of.

That intel is crucial for AppLovin, which is able to position tailored ads to consumers as they leapfrog cyberspace with an absence of tracking cookies.

“What we do on a specific mobile device is we’re able to build essentially a clickstream profile against consumers in a brand application on that device, and we can make the brand’s business on that device a lot more compelling,” Foroughi said.

Foroughi heaped disdain on other mobile ad tech firms for squandering hard-earned venture money by ramping up with massive marketing teams without building out their platforms.

“One of the interesting things that you see in ad tech is companies that have raised a lot of money. They hire really heavy duty sales teams, and they end up losing money for years on end. Some of these company’s are even going public right now in our industry despite losing money.”

AppLovin, by all indicators, stands in harsh contrast to the spend-at-any-cost mentality.

“We’ve been able to fund our own growth and haven’t raised any more cash since our first round over two years ago,” said Foroughi. “We literally just hired our first sales person last June. We haven’t needed to have that big sales team because the product is doing so well with these brands. It’s been selling itself.”

Foroughi said keeping it simple, focusing on the core product, has been a winning approach.

“Regardless of supply source, our goal is to connect with a brand, organize their data, and help them promote themselves effectively and measurably on any mobile device. On the other side of that, our advertisers are depending on our algorithyms and our system to go find the best suitors for them whether on an acquisition or retargeting basis.”

For Murphy, there is no downside for AppLovin, even for a company pushing 730 days old.

“The way they’ve been able to grow their client base,” he said, “says a lot about their product.”