French policed announced Sunday they had arrested a suspect in the terror attack against the Jewish Museum in Brussels, where four innocent people were shot dead last week.

Call it blind luck or dumb behavior: The suspect was arrested in a routine customs check in Marseille after an incriminating AK-47 and a video of the shooting were found in his possession — not because his face looked familiar to the police.

What’s wrong with this picture? 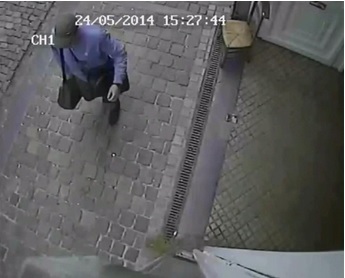 Or with this one? 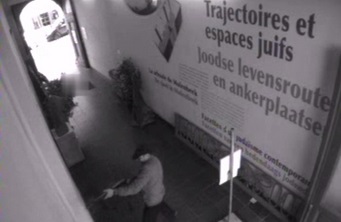 Although multiple video recordings of the shooting were successfully retrieved from the museum’s security system, the suspect’s face couldn’t be seen in any of them.

Why isn’t the suspect’s face visible in the pictures? Is it just because he’s wearing a hat? Or is there another much more fundamental reason?

The truth is that the majority of video surveillance systems (or CCTV systems – closed circuit TV) are designed to show what happened rather than who made it happen. CCTV cameras prefer range over focus and usually achieve that by being located very high.

Too high in this dreadful event.

Most security systems owners take the camera height for granted and don’t even stop to wonder if it’s in the right location.

Locating those two museum’s cameras lower would not only achieve better range and better videos but would also could have changed the murderer’s course of action.

Watching the attack’s video footage, it is quite obvious the murderer wasn’t even slightly bothered with the cameras, and we can easily assume he knew he was well-disguised.

Now, what if this terrorist had to face a zoomed-in focused camera located at about an average person height?

Ignoring this hypothetical camera would have led to a clear capture of his face.

Trying to damage the camera in order to avoid it might have triggered an alarm and might have caused him to spend less time shooting.

Disguising himself with a mask might have drawn attention to him prior to the shooting and could have also triggered an alert (some security systems can detect a person wearing a mask or sunglasses and a hat).

Now, I’m not saying that lowering the museum’s CCTV camera would guarantee a definite identification of the terrorist, nor that the end result would have been different. Nevertheless, there’s no doubt that the security situation on the ground would have been improved significantly either by getting a better face capture of the shooter or by complicating his attack.

Indeed, a suspect shown in a CCTV video can be identified, but in most cases the suspect’s face wouldn’t be fully visible, if at all, and the face resolution would be poor, simply because the CCTV system isn’t meant to capture faces.

So what’s the point of having a video surveillance security system if you need to identify a person but you can’t even see his/her face?

This is where face recognition technology steps in.

A massive improvement in face-recognition algorithms accuracy over the last two decades, together with an overwhelming increase in computation power and a sharp rise in cameras’ “pixel per dollar” ratio have made face recognition an important and reliable tool in the security world nowadays.

Facial recognition-based video surveillance systems are designed to capture high-quality face images in real time and trigger an alert when a match is found.

Of course, suspects have to be enrolled in the system’s database in order to be identified in real time, but even if they’re not, their faces can still be captured for later identification against other databases or for advertising them in the media.

Unlike CCTV systems where accuracy isn’t part of the jargon, face recognition-based video surveillance systems are all about preparing the right conditions in order to achieve high-accuracy rates.

The moment we step out of the lab and into the real world, accuracy starts dropping. However, it’s quite possible, and entirely up to us, to create close to optimum conditions on the ground.

Light stains such as dark shadows or bright light (aka hot spots) tend to distort the face in the photo by messing up the pixel information, which is the basis for any face recognition technology.

Although I can’t stress enough the importance of good lighting conditions, there are a few other factors that are crucial for high face-recognition accuracy: high-quality reference photos of the people in your database, high-resolution video, sharp face images, and camera location, which relates back to lighting conditions.

When configured correctly, face recognition in video surveillance can become a powerful real time tool in your arsenal. It provides a unique security value that can’t be achieved by any other means.

This growing consensus coupled with ongoing technology improvements are driving high demand for face recognition systems. From the FBI with its whopping billion-dollar face recognition project across the nation, through other city and law enforcement agencies in and outside the U.S., we see a great adoption of face recognition technology. We also see fast expansion into commercial and consumer applications.

Somewhat similar to tapping your phone or hacking into your computer, face recognition raises concerns over privacy and civil rights. But the byproduct of misusing and abusing the technology can’t overcome the benefits and its security added value.

Moshe Greenshpan is founder and CEO of face-recognition company face-six.com.