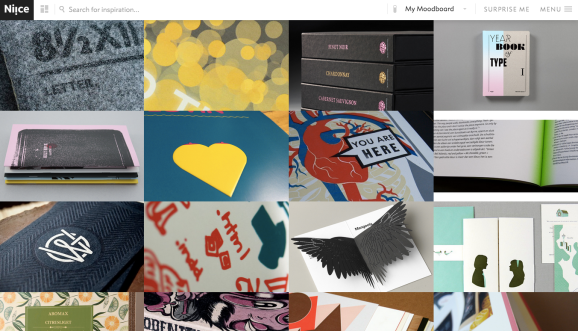 Niice, a search engine for images that can help designers devise original ideas, just got a lot more helpful.

It officially launched this week, with monthly subscriptions for premium services, as well as a “moodboard” feature for storing all of your favorite images in one common place that you can share with colleagues.

But Niice is already neat, whether you’re a designer or not.

I could see that — I have run across some surprising images on the site during searches — or, then again, I could be skeptical. It could be merely an imprecise algorithm that happens to turn out pictures that make you raise an eyebrow and wonder about relevance.

If you search for “dog,” for instance, sure, search results will show you a few pictures of dogs, but most results are related to dogs in a more abstract way. There are illustrations of dogs and hot dogs, covers of books with titles featuring the word “dog,” and random stuff, like a photo of a bottle of white whiskey that goes by the name “White Dog” and a a map of movie titles, including — guess! — “Reservoir Dogs.”

When you find something you like, you can hit the plus sign at the top of the image. That adds it to your private moodboard.

Name that moodboard, add a description, and drag and feel free to drag to put them in an order you like. Flip through them all like you blaze through pictures of your Facebook friends. Upload an image to a moodboard by dragging and dropping, or use a Chrome browser plugin to add pictures from websites.

From there, you can share the moodboard. Grant access to a friend or someone you work with. Or you can download a JPG containing everything on the moodboard.

Designer Chris Armstrong, formerly of Typecast, started working on Niice with Pete Hawkins, a developer friend from Typecast, last year. Armstrong had grown tired of spending such a long time searching for inspiration on image-packed websites like Behance and Designspiration, or even just sites that aggregate images from lots of sources. “Google Images didn’t do the trick,” Fulton said. Rather than spend almost an hour looking for inspiration every morning, Armstrong “just wanted to speed that up,” Fulton said.

While social networks and other sites take pride in how long people spend on them, at Niice the idea is to help people find great stuff as fast as possible. The goal, Fulton said, is to strike a “balance between stickiness and effectiveness.”

Some people will think of Pinterest when they play around with Niice. But Niice draws from image sources that are made for designers, like web design site Dribbble. And Niice could be more presentable to a designer’s customer than a general Pinterest board.

And now Niice can take on revenue when people use it for business. (It also shows ads here and there.) For a $5/month pro account, you can make as many moodboards as you want, with image upload capability and no ads. For $15 per month, you get five pro accounts, and everyone gets access to a private image stream.

Niice is based in Belfast, Northern Ireland. Most of the 525,000 site users don’t have accounts but have just executed searches. The site received 11,000 requests for access to its beta version.

And the team has big ambitions.

“We want Niice to be actually the first thing in a design team’s workflow and … a creative hub,” Fulton said.

Next steps include adding a way to comment on images in moodboards and creating a means to integrate Niiice into other applications, Fulton said. More image sources are on the way, too.