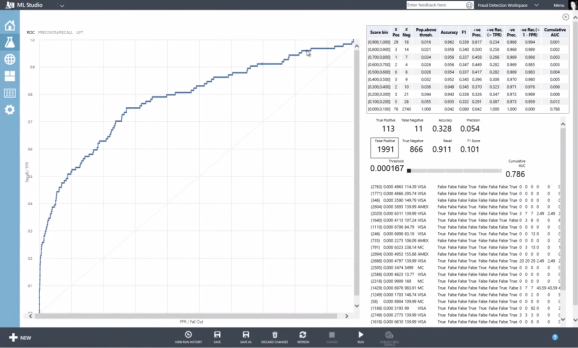 Microsoft wants to give businesses an easy way to predict outcomes with data inside its cloud.

Toward that end, today the tech giant announced Microsoft Azure Machine Learning, a service for engineers to build models of data with the push of a few buttons. Potential applications include fraud detection, demand forecasting, and risk prediction.

Startups have devised with standalone services, often cloud-based, to handle this sort of work. Context Relevant, InsideSales, Lattice, and Reflektion, for example, have pulled in funding lately.

But a tool from Microsoft sporting a clear graphical user interface, with proximity to Microsoft’s growing public cloud stands to pick up considerable adoption.

The system’s algorithms have been battle-tested. They were developed for Microsoft services like Bing and Xbox, Joseph Sirosh, the company’s corporate vice president of machine learning, wrote in a blog post today.

Around 100 customers have been using the service in private preview for almost one year now, a Microsoft spokeswoman wrote in an email to VentureBeat.

One company using the service in early preview, MAX451, is “helping a large retail customer determine what products a customer is most likely to purchase next, based on ecommerce data as well as brick and mortar store data,” Sirosh wrote. Another early user, OSISoft, has been collaborating with Carnegie Mellon University to do fault detection in real time and diagnose “energy output variations across campus buildings,” according to the blog post.

Such analysis can take lots of time to assemble. One might bring together lots of different kinds of data inside Hadoop open-source software and then choose a compatible business-intelligence tool with predictive analytics capability. That could take time and money. But a self-service tool working with data already sitting in a cloud could be easier. And a subscription pricing model could be more palatable.

An application programming interface (API) will be available, allowing companies with on-premises data centers — or data in public clouds — to use the service once they have created models in the cloud, the spokeswoman wrote.

The public preview of Microsoft Azure Machine Learning begins in July. Pricing details were not disclosed.