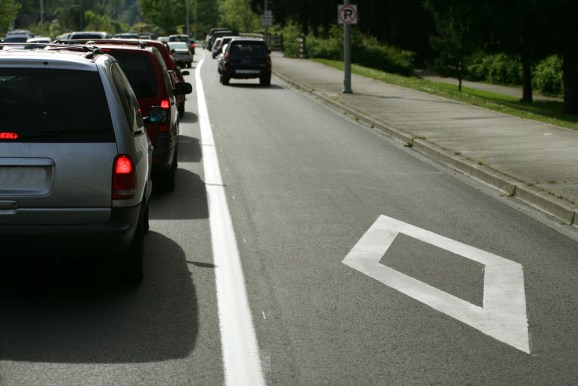 The end of Net Neutrality will look like this (but not with cars and roads, of course).

San Francisco mayor Ed Lee and 16 other cities’ mayors have called on the Federal Communications Commission to make network neutrality a real thing.

Today, the U.S. Conference of Mayors unanimously adopted the resolution, which calls on the FCC “to enshrine principles of transparency and non-discrimination into future regulations about how the Internet works.”

According to the resolution, “the US Conference of Mayors supports securing a commitment to transparency and the free flow of information over the Internet, including no blocking of lawful websites and no unreasonable discrimination of lawful network traffic.” It also calls upon the White House and Congress to support these aims.

The mayors’ resolution is largely symbolic, since the Conference of Mayors has no legislative authority. However, it’s a sign that network neutrality is starting to matter at the local level — which might give national politicians, who have to rely on the opinions of local voters, some pause.

Network neutrality has become a hot topic since January, when a federal court ruled that the FCC did not have jurisdiction, under its current rules, to enforce net neutrality. Subsequently, FCC chairman Tom Wheeler proposed a so-called “net neutrality” framework that many observers criticized as being not particularly neutral at all — and followed up with a paradoxical proposal to allow “fast lanes” on ISPs’ networks, but only if there are no “slow lanes.”

The FCC’s wishy-washy approach to net neutrality has frustrated many people in the tech industry, who consider the principle essential to the continued functioning of the Internet as a free and open marketplace for new ideas, startups, and forms of media.

“An open Internet is the backbone of a market-driven democracy in the 21st Century,” said New York City Mayor Bill de Blasio, in a statement announcing the vote.

“Our economic and civic health depend on the internet; it is the infrastructure of the 21st Century,” said Boston Mayor Martin J. Walsh, in the same press release.

As for Lee, his canned remarks were in the same vein: “Net neutrality is critical for an innovation economy to thrive, because if the broadband companies could choose what web pages you can access, the Internet would lose its power as the most powerful communication tool we’ve ever known,” Lee said.

The net neutrality proposal was one of 117 resolutions adopted by the Conference of Mayors this year.