Imagine walking into a mostly empty room that contains only a table with a cup on top of it. Now imagine being able to figure out how much volume that cup holds simply by taking a photo and making a few gestures with your fingers.

No, this is not one of those irritating word problems from high school math class where you need scratch paper to work out a series of equations before learning the answer. Instead, the dimensions of the room, the table, and the cup can all be determined in a few quick steps using the newly launched app from Austin, Texas-based startup Smart Picture.

Google invited Smart Picture — as well as a handful of other developers — to present its measurement tech at its annual I/O conference, which kicked off today in San Francisco. Google’s goal is to demonstrate the range of capabilities Android developers have when building apps that use its Google’s Tango smartphone, Tango tablet, or a comparable device with 3D mapping built-in.

Most current generation smartphones can only take static, two-dimensional images. But a 3D mapping camera can record the entire shape of an object or scene. That means it can see around or inside of things, creating real depth rather than just the illusion of depth. This isn’t a new technology, it’s just been very expensive until now. However, with the debut of Google’s Tango devices, 3D imaging can be done far more cheaply — down from thousands of dollars to just hundreds.

To use Smart Picture’s app to measure an object/room/structure, you’ll first need to capture every angle using a 3D mapping-capable camera. Once the shot is captured, Smart Picture provides you with a set of tools that let you specify exactly what you’d like to measure. The app then delivers the measurements via a cloud-based platform.

“Our measurements are within 5 millimeters of complete accuracy,” said Smart Picture director of product marketing Scott Bamford in an exclusive interview with VentureBeat. “The goal is to eventually be accurate within 2 millimeters.” 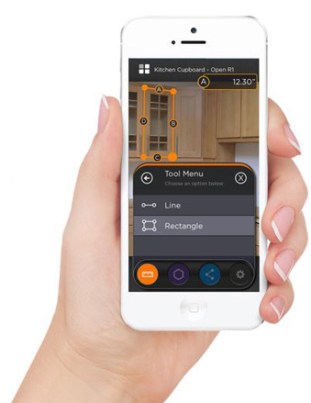 Above: An image showing Smart Picture’s measurement tools for its smartphone app.

Smart Picture’s business strategy doesn’t include pushing out a consumer-facing application. Instead, the company plans to license its technology to businesses in the home improvement and insurance industries — sort of like a Measurement-as-a-Service, if you will. For example, Home Depot could integrate Smart Picture’s tech into its own mobile app, which its customers could then use for home improvement projects.

Home improvement businesses in particular may find a smart measurement service like Smart Pictures very useful to their day-to-day operations. Contractors would save lots of time measuring dimensions of a room or building by letting a Smart Picture-powered app do the heavy lifting. Or in some cases, home improvement businesses could even outsource a preliminary estimate for a job by letting customers take the measurements — even if they don’t have a 3D mapping camera.

“Our technology started by combining multiple static images to reach meaningful measurements,” Bamford told me, adding that this could be done using regular smartphones as long as a reference object (aka a piece of paper with a bar code or other identifiable image on it) is included within the shots.

“We wanted to build something that could immediately be used by everyone regardless of the hardware,” Bamford said. “But having a phone with 3D mapping will allow us to find measurements much more efficiently.”

Smart Picture plans to generate revenue through partnerships with its business clients, who would gain access to a limited version of the smart measurement service for free. More advanced features would require a paid subscription that the startup would then take a cut from. Bamford declined to disclose any of its clients, he did say that Smart Picture is in ongoing discussions with many home improvement-related businesses.

But Smart Picture isn’t the only company focused on providing quick measurements via the 3D imaging tech within Google Tango Hardware. Montreal-based software publisher Sensopia, who was also invited to present at Google I/O this week, debuted its new MagicPlan service today that takes a different approach for the usefulness of measurements and mapping.

Unlike Smart Picture, MagicPlan focuses on surveying a venue or building and creating a thorough indoor map, which includes room measurements and displays the shape of the room. Users can also walk within the map, revealing any blind spots by capturing it with the Tango camera — (kind of like those flying lit-up balls used in the movie Prometheus to create a map of a vast alien spaceship, except real).

Check out the embedded videos below for a closer look at how both Smart Picture and MagicPlan work.