With two cofounders, three developers, and less than $1 million in seed funding, Sher.ly intends to bypass one of the most frustrating, ubiquitous parts of cloud storage: syncing.

To accomplish that goal, Sher.ly has abandoned the cloud altogether.

It sounds backwards for a “cloud” startup, but Sher.ly is not just local storage, explained Sher.ly chief Blazej Marciniak. The startup makes software that links devices together, enabling access to all of your files from any connected device without actually moving your data anywhere.

“Syncing sucks,” said Marciniak in a conversation with VentureBeat. “90% of sync data is a waste of traffic and bandwidth, because you move around data you don’t really need … so we came up with a better idea.

Sher.ly calls its core tech “gateless VPN,” as the devices talk to each other, not a central server. In that way, Sher.ly resembles peer-to-peer file-sharing services like BitTorrent Sync — but, of course, there’s no syncing involved. Sher.ly also characterizes its auditing, reporting, and access management controls as first-class. 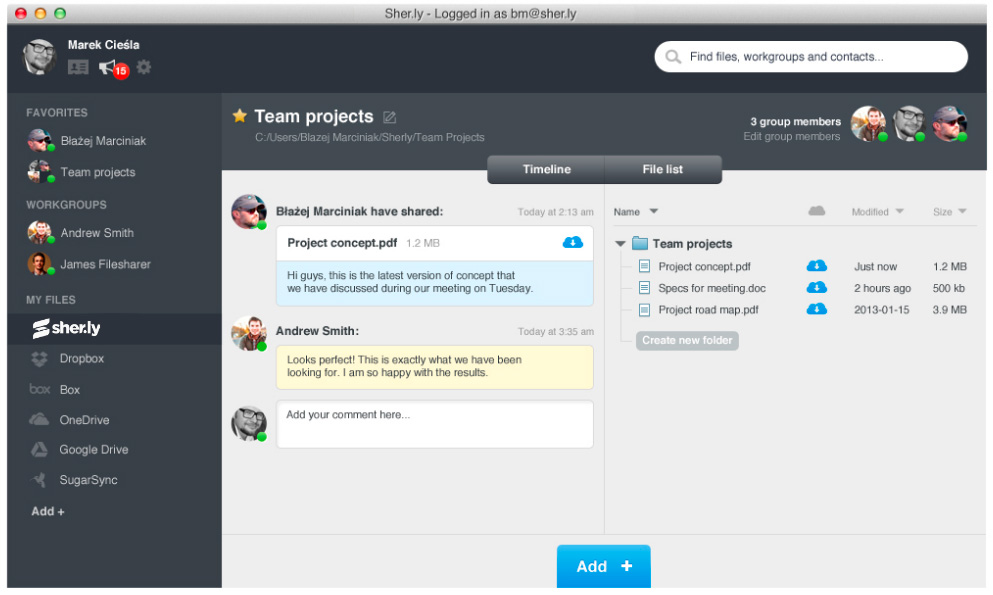 While Sher.ly works for individuals, the startup is courting the enterprise market. But at least one bigger player is skeptical of Sher.ly’s chances to strike major deals.

“This may be great for personal use or for the 5 to 25 seat type companies, but would never make its way into an enterprise-type deployment,” Vineet Jain, CEO of cloud storage company Egnyte, told VentureBeat. “I say ‘never’ loosely, but it is highly unlikely.

“I see this as somewhat of an Apple product-type answer to the more complex [network-attached storage] devices that already exist on the market right now,” said Jain.

Sher.ly is currently running a Kickstarter campaign for the “Sherlybox,” a network-attached storage device that works with Sher.ly’s software. But the software also works for Mac and PC, with Linux support coming in a few weeks, and mobile support after that. Marciniak emphasized that the Sherlybox is a cool product, but the company’s primary focus is its software, which it’s currently beta-testing with around 2,000 users. The company expects to make the Sher.ly software generally available this fall.

“My goal is to introduce better and faster way to handle data,” said Marciniak. “I believe it is within our reach.”

Sher.ly, which raised $550,000 from a seed-stage investment firm in Poland, will soon discover if that vision appeals to Silicon Valley’s financiers. Marciniak is currently traveling around the Valley seeking American backers.