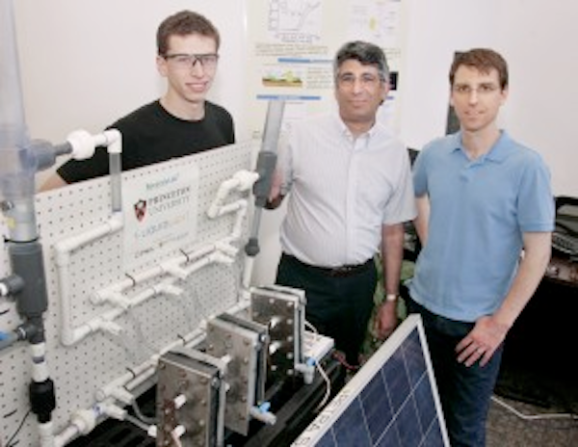 Cutting back on greenhouse gases is only one part of the fight against climate change. The planet will also need to capture and store — or, better yet, capture and re-use — the gases already out there.

Now, new research from Princeton and a New Jersey-based startup has led to the most efficient way yet to convert carbon dioxide into a possible fuel.

The project, conducted by the lab of Princeton professor of chemistry Andrew Bocarsly and researchers from a company he helped found called Liquid Light, uses a commercial solar energy panel from utility company PSE&G to power three electro-chemical cells.

The cells, each containing metal plates surrounding a chemical mixture, converts CO2 and water into formic acid. The team obtained a 1.8 percent energy efficiency, which might sound paltry.

But, if you’re a plant, your jaw — if you had one — might drop open. This is twice the efficiency of natural photosynthesis, which similarly uses sunlight and CO2 to generate energy and store it as sugar. Not incidentally, this is also the highest man-made efficiency rate for this process.

“We originally started working in the 1990s [on] converting CO2 into chemicals without a lot of energy,” Bocarsly told VentureBeat. He added that when the first paper was published in 1994, before climate change became well-known, “nobody was interested.”

The main idea of the research, he said, is to use CO2 to create a variety of compounds. “Formic acid is just one of those compounds,” Bocarsly told us.

What good is formic acid? Some energy companies are researching ways to store solar energy – an essential step if the sun’s energy is to be used when the sun is not available – in fuel cells containing formic acid. Formic acid also has other uses, such as creating formate salt for de-icing airplane runways.

In 2012, a UCLA research team created a process to turn carbon dioxide into an alternative alcohol-based fuel called isobutanol — using formic acid. As isobutanol can be used as a biofuel substitute for gasoline without modification to equipment, its production could become another destination for formic acid.

But Liquid Light is looking to generate a range of chemical products from CO2. In March, the company announced a new process for creating as many as 30 high-value chemicals — beginning with ethylene glycol — from the too-abundant CO2.

Bocarsly noted that a lot of research is being conducted on collecting CO2 “and then doing something with it.” He added that his team and Liquid Light “are focusing on the do-something part,” trying to see if “you can use [off-the-shelf] things, but do it efficiently.”

“We did [this recent] experiment in the parking lot behind Liquid Light,” off a highway, he said. “You don’t get more [ordinary] New Jersey than that.”

The research project was funded by the National Science Foundation and Liquid Light, and is described in a recent edition of the Journal of CO2 Utilization.