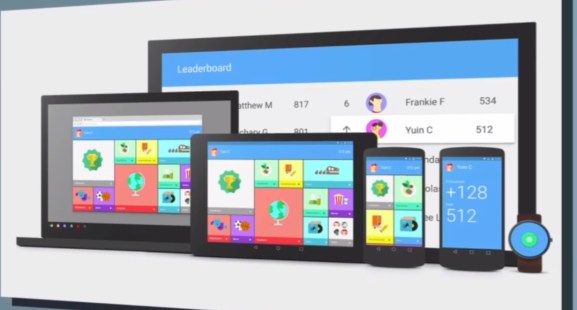 A shot of Android L on smartphones and tablets, as well as material design across other devices.

With its new Material design language, Android may be backpedaling a bit on the flat design that once differentiated it from iOS.

But the Google’s design chief, Matias Duarte, says the swinging pendulum will reach equilibrium as a design that is based on real-world objects but doesn’t cheaply imitate them.

At Google’s I/O developer conference last week, Duarte showed off what will become the new visual identity of Android, at least on devices where the manufacturer doesn’t try to wipe it out. Material design encourages a clean look with lots of white space and easy alignment of objects. It also engages the user with visual indications of touch using features such as a “ripple effect” animation. And, as is often the case when operating system designers decide to embrace a refined aesthetic, it includes a redesigned system font (Google made some slight tweaks to its Roboto font, which debuted on Android a few years ago).

We’ll be exploring how focusing on design can help grow your mobile business at MobileBeat in San Francisco on July 8-9.

The visual identity is Google’s ambassador to new platforms such as Android Wear and Android TV. And, in addition to allowing Android apps to run on Chromebooks, the new user interface guideline helps bridge Google’s worlds of native and Web design. Any visual effect that can be created on Android can also be created on Chrome, allowing Web sites to match the fluid touch-friendly environment of mobile apps.

Material design provides an illusion of depth. Consider an app like Facebook in which icons of friends float above the main screen. In Google’s next big Android update, currently called “L,” those icons would have shadows to indicate that they are at a higher level of interface. Objects that are being moved appear to rise above others and are dropped back in.

Google seems to have back pedaled on its philosophy of flat design. Should we expect to see skeuomorphism, the notion of making design elements look like real-world objects, making a comeback?

Duarte says that Material design embraces surfaces because they exist in the real world, but that is a far cry from trying to emulate leather stitching or green felt as we saw in the heyday of skeuomorphism on Apple’s iOS.

The move comes as Google has struggled to maintain consistency across products using Android, particularly when vendors or carriers customize it. Material Design would provide a more uniform look as Android moves across devices, particularly as it moves across platforms.

Another reason why Google may feel emboldened to clamp down on Android’s visual identity, other than the operating system’s general momentum, is that products such as watches and TVs are more likely to be sold at retail stores, where Google won’t be as pressured to differentiate the interface to carriers’ interests.

Duarte also sees the new look as a chance to get a jump on future displays. As he introduced the new look, he said the team imagined a surface that could support flat objects at multiple depths. Such a thing is far from the domain of science fiction. Tactus is one company that has made a display that can change the height of parts of the display dynamically, and the future may hold holographic displays that can project objects above the glass.

In advance of such technology appearing on Android phones, though, Material design should eventually provide a middle ground between the saturated iOS and the stoic Windows Phone.