Update July 11: TaskRabbit users revolt as the company shuts down its bidding system

Task-outsourcing site TaskRabbit just killed off its famous task bidding system for a new model: instantly bookable services in four of its most popular categories.

The service announced news of the change last month to ease the transition among the service’s users and providers. Although the shift is monumental for the company, TaskRabbit is confident its existing community will embrace it. It appears that TaskRabbit users quite liked the results of the previous service — it grew by 1.5 million new users over the past year — but hated the bidding system.

TaskRabbit made that clear, albeit more politely: A company spokesperson told us the new “product is based on a couple of things: user feedback, and our marketplace and data science team diving into what was causing friction on our platform.” The service was tested in London for months prior to today’s service-wide relaunch.

With the destruction of the bidding service, TaskRabbit has ushered in fixed hourly rates for tasks. Food deliveries, for example, start at $10 per hour. Previously, if a TaskRabbit user wanted food delivered, they had to post the job on the service — say, for Cronut delivery — and await bids from TaskRabbit contractors. The new TaskRabbit system trims away this process, making it speedier and more predictable for both parties involved.

TaskRabbit launched in 2008 as a flexible utility for getting just about anything done, including some strange requests, like “wrap my co-worker’s desk in cellophane,” and “write a letter to my ex-girlfriend to win her back.” The new system permits requests outside of TaskRabbit’s main categories — cleaning, handiwork, moving, and errands — but discourages them.

According to TaskRabbit founder and chief Leah Busque, “house cleaning is the top category, and beyond that, shopping and personal assistance is definitely a close second.”

“In no way did Uber inspire this product change”

As news of the pivot broke, comparisons to Uber immediately made headlines. But TaskRabbit vehemently denies that its new booking system was in any way inspired by Uber: “Uber has become synonymous with an on-demand lifestyle, but it did not inform our strategy … In no way did Uber inspire this product change. We came up with it on our own.”

With the relaunch, TaskRabbit has redesigned its service on iOS and the Web, and the company is launching on Android for the first time. Here’s a look at the new design on mobile: 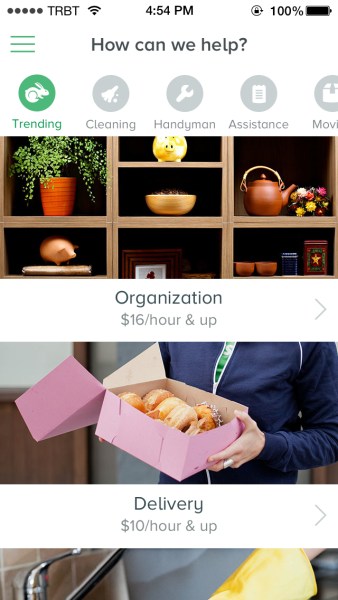 The newly simplified service may pose a threat to specialized on-demand companies, such as Instacart, which focuses solely on grocery deliveries, and WunWun, which more broadly focuses on quick product deliveries.

To bolster the new direction, TaskRabbit also announced a new insurance policy today: “Every task posted on the TaskRabbit platform will be insured up to $1 million USD,” the company shares.