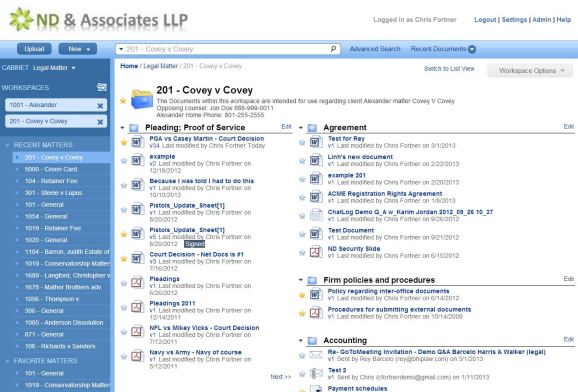 NetDocuments, a provider of document- and email-management services for law firms, has picked up a $25 million round of investment.

The company offers its document-management software as a service (in other words, a software-as-a-service model) in exchange for subscription fees. Law firms and financial services companies are its primary users, according to the company’s website, although real estate, health care, and accounting firms also work with it. It says that it has hundreds of customers in more than 140 countries and that it finds use from almost 10 percent of the Am Law 100, an annual list of the most profitable law firms in the country. Translation: Eight or nine of the top law firms in the U.S. use NetDocuments.

The company says that the majority of its market opportunity is in legal documents, since it has no direct cloud-based competitors tailored to law firms. Many customers, it says, are switching to NetDocuments after using more generic document-management services from HP/Autonomy, OpenText, and Worldox.

NetDocuments says that it is profitable, with revenue growth of 35 percent annually.

The investment comes from Frontier Capital, which is in Charlotte, N.C. Technically, this is the company’s fourth (Series D) round, after several investment rounds more than 10 years ago in a previous version of the company known as SoftSolutions. However, the company says that it has taken zero investment in the past decade and that this round pays off the initial (minority) investors.

“As our research shows, NetDocuments is the only pure play software-as-a-service provider of document management in the legal industry, which is just beginning to realize the benefits of cloud computing,” said Frontier partner Michael Ramich, in a statement.

NetDocuments is based in Lehi, Utah, and employs about 60 people in the U.S. and U.K.