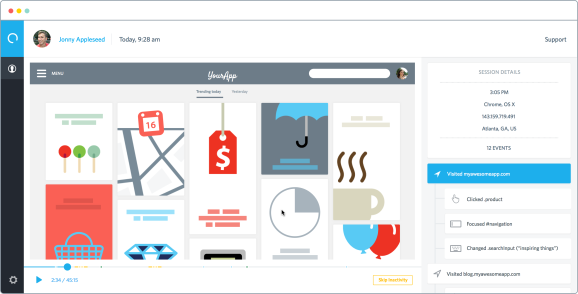 Web developers can find it challenging to fix bugs that users report if they can’t recreate the problem themselves. But FullStory, a company started by a group of ex-Google employees, is building a product that can help with that.

FullStory, which is announcing today that it has raised a new $1.2 million, has built a way to replay a person’s interactions with a website or web app by recreating that session’s document object model (DOM) and its mutations, meaning that it reproduces how the browser and website were behaving at the time.

“With that snippet of code, we collect all the events that take place during a user’s session. We let our users actually be able to empathize with their users,” FullStory chief executive Scott Voigt told VentureBeat in an interview. The snippet of code is easy to embed in a website.

So, if a product support person, for example, is trying to help a customer, they can rewatch what the customer did while interacting with the product or website and see where the hangups happened. FullStory even integrates with support tools such as Zendesk, Desk.com, and HelpScout. Another use case Voigt said is emerging is the case of support and engineering teams using FullStory as a communication tool as it provides an easier, clearer way to convey a user issue.

FullStory can also help product teams figure out how exactly customers are using their products and validate the user interface by replaying users’ use sessions.

This last use case is what gave the founders the idea for FullStory in the first place. They had sold a previous company to Google back in 2005 and eventually left to start a new project. While working on that project they realized that none of the available tools gave them the level of insights into customers’ behavior they needed.

Voigt cites tools such as Google Analytics, Mixpanel, and so on as the alternatives to FullStory, which, although they are great tools, don’t provide the full picture. With these other tools, people have to install the tracking code, then go set up specific events they want to track, and continue to add events and adjust that list. FullStory directly captures the entire interaction between the user and the product.

“FullStory enables product, marketing, and support teams to understand what users are experiencing in their products,” said Google Ventures general partner Karim Faris in a statement.

“They offer a natural way for companies to explore product and customer data that typically is buried in log files. The team is exceptionally strong, and their approach is clever, well differentiated, and built to scale to mass traffic on the largest publishers,” he said.

So far, the team has been testing its product with some private beta testers, but it’s now opening it up to the public, and to support this launch it plans to use its new funding to expand its team. “We are going to get to work on sales and marketing,” said Voigt. Currently, FullStory’s team only has seven members, all on the product side except for Voigt.

Google Ventures led this round of funding, with additional funding from Atlanta-based investor Tom Noonan.

FullStory was founded in 2014 by Voigt, Bruce Johnson, and Joel Webber, and the company is based in Atlanta, Ga.