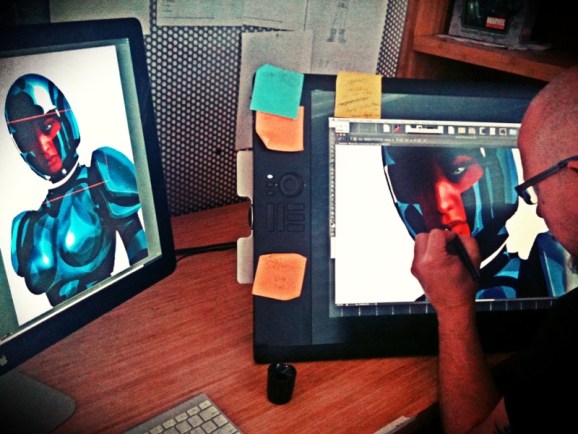 Updated 12:50 p.m. Pacific with comments from Madefire’s CEO about the new “print” category and revenue.

Digital comics startup Madefire has released an Android app today that gives people access to its selection of “motion books.”

Motion books are digital comic books that pan over comic imagery and incorporate audio to offer a more cinematic comic experience. Madefire’s motion books also take advantage of your device’s accelerometer to move around comics as you move your device.

Since launching two years ago, Madefire has added comics people can purchase made by a slew of top comic book publishers, including Top Cow/Image, IDW, and of course DC Comics. It’s also added a collection of creator-owned titles produced specifically for Madefire’s motion book platform.

The move to Android has been a long time coming, as it first launched for iOS devices two years ago.

The startup also announced today that it will begin offering a new “print” comics category to its store, which will offer digital versions of comic books and graphic novels without motion capabilities that were originally produced for print. The category will feature books from IDW, Valiant, Oni Press, Top Cow, Liquid Comics, and others, according to the startup.

This means Madefire is now directly competing with the likes of leading digital comic service ComiXology, which was purchased by Amazon earlier this year. However, the startup is likely hoping that the appeal of its motion books — combine with most comic book fans’ desire to have all their purchases on the same platform — will be enough to compel people to buy “print” comics as well.

What’s interesting about the move to start selling regular digital comics is that Madefire obviously needed to expand its selection of available comics, I’m guessing, to boost revenue.

While Madefire declined comment to VentureBeat about its revenue or sales numbers, data from Madefire’s App Annie listing reveals that the startup’s iOS app saw users making 300 in-app book purchases or less per day over the last 30 days (so, not a ton of revenue). Adding a selection of “print” comic books could increase those sales and make a big impact, at least based on App Annie’s unverified data.

It’s also a tad surprising considering that Madefire founders (and established comic book creator pros) Ben Wolstenholme and Liam Sharp were all about moving the medium of comics forward with the startup’s motion books tech.

“Moving into the print market was always something we were capable of and had entertained. And with recent fluctuations in the marketplace we identified an opportunity,” Wolstenholme told VentureBeat in an email. “Releasing an authentic comic book reading experience, one that we felt complimented our ground-breaking Motion Book, was a natural addition to our growing platform.”

The “fluctuations” he’s referring to is likely the decision by ComiXology to stop selling in-app purchases through its main iOS and Google Play Android apps. The move was viewed by the comic book community as a huge inconvenience despite that it required ComiXology to give Apple/Google a 30 percent cut from every sale, which is money that would otherwise go to comic publishers, creators, and ComiXology. (It’s worth noting that in-app purchases from any publisher-branded digital comic app, such as those from Marvel and DC Comics, still allow in-app purchasing.) In essence, ComiXology’s decision was prompted by its acquisition by Amazon. And that means Apple (in particular) will lose out on millions in revenue, while allowing ComiXology to use that same money to possibly reinvest in its own service.

But the inconvenience for comic fans of not being able to immediately purchase a comic from the same app where they read the comic is something Madefire thinks it can capitalize off of. That said, it’ll be interesting to see the company’s logic play out over the next year.

Founded in 2011, Berkeley, Calif.-based Madefire has raised 7.4 million in funding to date from a slew of notable digital media and publishing investors.