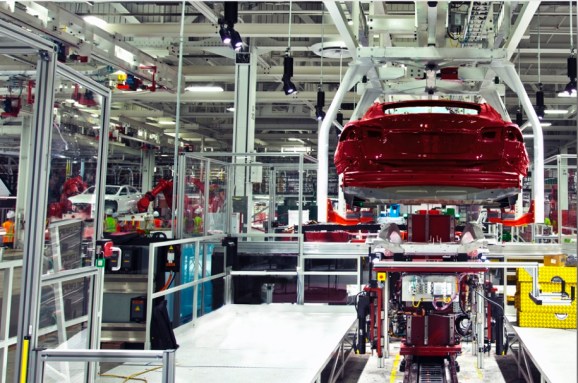 Good news for those planning to buy an expensive electric vehicle in the near future: Tesla Motors will be making plenty.

Still, Tesla seems to be on track to exceed its target goal to produce and sell 35,000 for the entire year. What’s more is that the company said it’s also on target to produce 100,000 vehicles in 2015 — meaning there shouldn’t be any shortage for those hoping to buy a Tesla vehicle at some point before then.

But Model S delivery numbers are far from the only exciting piece of news the company had to share. Tesla said it’s gearing up for a new production facility that will make additional Model S vehicles as well as the company’s new SUV crossover, the Model X.

During today’s earnings call, CEO Elon Musk said the Model X is already popular among consumers, despite the fact that it doesn’t exist yet, and the company hasn’t provided many details about the new vehicles in its showrooms.

“When someone comes in asking about a Model X, we anti-sell it,” he said, adding that the showroom associates actually try to push them to buy a Model S instead. “We will not have a demand problem.”

The company also confirmed that it has signed a partnership with Panasonic on the forthcoming $5 billion Gigafactory battery plant. That news had been reported earlier, but not confirmed.

The partnership will have Tesla manage the facility and hire workers to assemble batteries, while Panasonic will ramp up production on making the battery cells. This is currently already happening, but the key difference is that it’ll all be done under one roof. Panasonic is also investing in production equipment for the new factory. And while neither company released exactly how much that investment would be, rumors indicate that it could be around $194 million to $291 million.

“The Gigafactory represents a fundamental change in the way large scale battery production can be realized,” said Tesla Motors CTO JB Straubel in a statement. “Not only does the Gigafactory enable capacity needed for the Model 3 [the BMW 3 Series rival announced last week] but it sets the path for a dramatic reduction in the cost of energy storage across a broad range of applications.”

It’s Tesla’s hope that the battery factory will help drive down costs on the production of electric vehicles in general, as VentureBeat reported earlier this week. And if the company plans on producing enough batteries to supply 500,000 electric cars by 2020, it’ll certainly need the Gigafactory to do it.

A location for the Gigafactory, however, has yet to be announced. Tesla did say that a site in Reno, Nevada was the most likely candidate, and that it had started preparing that site back in June.

Tesla is holding an investor call to discuss its Q2 earnings shortly. We’ll be listening for further details on the company’s partnership with Panasonic, and will update this post with any new info.