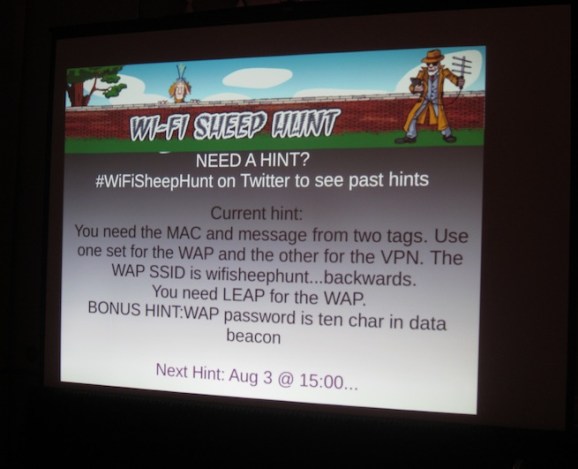 A hint for those hacking for the Wall of Sheep

LAS VEGAS — Rule number one at Black Hat and Defcon is simple: Mobile devices stay in your hotel room.

“My team came to me and said, ‘I’m not bringing my phone in there.’ They’re serious. You don’t want to end up on the ‘Wall of Sheep,'” said Ghostery chief executive Scott Meyer, whose executive team is at the hacker conference.

The “Wall of Sheep” is run by a group of hackers who love highlighting attendees who who don’t practice safe computing — that is, making it easy for hackers to turn your smartphones and mobile devices out and present your data for all the world, or those at the fourteenth annual hacker fest, to see.

The “Wall of Sheep” has a motto too: “Security Awareness For the Flock.” In this case, it’s advice well taken.

“My team said there’s hackers there who, all day long, are tying to embarrass you,” he said.

Andy Kahl, Ghostery’s director of transparency, is more than in agreement with his boss.

“But we prefer to be out and away from all that,” he said.

Hacker veterans will tell you not to bring mobile devices into the conference for obvious reasons. Behind the scenes, holed up in rooms on the twentieth floor, black hatters are looking for holes and flaws in your security. Those with encryption likely fair better. But you’ve been warned.

Those at the conference have grown accustomed to seeing well-dressed technology executives and suspected intelligence agents, spies really, huddling in corners with their ears pressed against $20 Kyocera DuraXT flippers.

Laptops aren’t immune, either. In fact, I’m chimping out this post from the safety of Starbucks. But Meyer said that may not be safe enough. My iPhone is turned off, sleeping near the pillow of my hotel bed. I’m rolling the dice.

“My team are using burners. And they’re connecting to the net through ethernet cables or VPNs,” Meyer said.