Even though LG has come a long way when it comes to making Android phones, it still has a lot to learn about building the ideal smartwatch.

That quickly became apparent as I tested out LG’s G Watch ($230), its first major smartwatch and one of the first round of Android Wear devices. It feels like a first-generation product in practically every respect, from its build quality to its surprisingly weak battery life. And that’s bad news for LG, as it’s facing competition from more creative competitors like Samsung and Motorola.

If there’s one thing LG (and pretty much every other consumer electronics company) can learn from the G Watch, it’s that sometimes it pays not to rush out and be one of the first a new platform.

Even though the G Watch’s hardware is fairly ho-hum, Android Wear is still an attractive platform. After years of failed attempts at smartwatch platforms, including Samsung’s Android and Tizen-based platforms, it’s nice to see a decent stab at wrist-based computing.

Android Wear on the G Watch functions much like it does on Samsung’s Gear Live. It’s always connected to your Android phone, and its main job is to push notifications — including things like new mail messages, Google Hangouts chats, texts, and Twitter replies — from your phone to your wrist. The entire interface looks like Google Now, Google’s Android virtual assistant which also sits at the core of Android Wear. 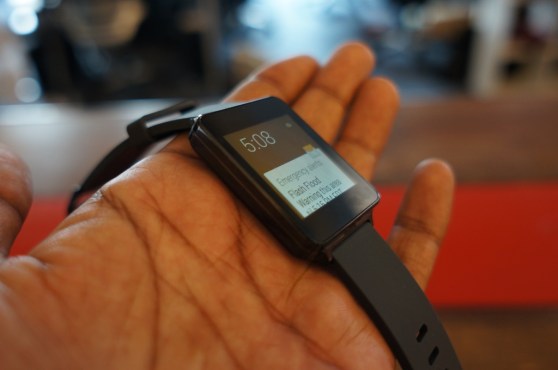 While you can tap and swipe Android Wear’s interface like your smartphone’s UI, the real joy of the platform is using voice commands to control Google Now. You can have Google’s Now pull up directions or write out a text just by speaking into your wrist. I found the voice recognition to be surprisingly accurate, and I rarely had to repeat myself to be understood. If you’ve dreamed about living out your Dick Tracy (or in my case, Michael Knight) fantasies, Android Wear will make it happen.

Google’s smartwatch platform also benefits from all of the design progress it’s made since launching the Android OS in 2007. Android Wear is colorful, fluid, and overall quite attractive. It also has some basic activity-monitoring features built in, though I found the step-tracking on the G Watch to be far less accurate than my Jawbone Up 24.

Bad: Almost everything else

I can understand LG’s desire to be one of the first companies out there with an Android Wear watch. After all, it’s become one of Google’s key partners for its Nexus phones, and the company’s own flagship Android phones have improved significantly over the years. And yet I can’t help but think LG would have been better off sitting this launch out. 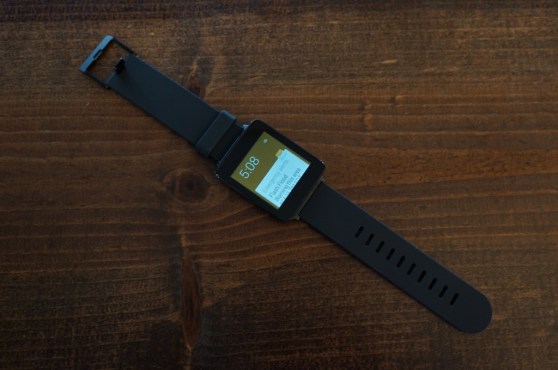 It’s not that the G Watch is a terrible smartwatch. It just reeks of a complete lack of a imagination. Its plastic and blocky design could easily be mistaken for a prototype Android Wear device, not something a company actually spent time designing. Its battery life barely lasted through 5 to 6 hours of moderate usage. And even though I’m no stranger to wearing large wristwatches and fitness bands, it still felt a bit too bulky for something I’d want to wear every day.

The kicker? Despite all of the G Watch’s weaknesses, it’s bafflingly $30 more than Samsung’s Gear Live, which has a slightly more refined metal design, a better screen, and a heart rate monitor. (The Gear Live certainly has issues of its own, as we explored in our review.)

Once Motorola’s Moto 360 smartwatch hits the market, which at this point looks like it could be be the first killer Android Wear watch, the G Watch will be even less relevant. So I have to ask: LG: Why even bother?

Aside from the G Watch’s own issues, Android Wear also has some growing pains of its own. The platform did a decent job of fetching notifications from apps like Twitter, Gmail, and Google Now; but I rarely found those notifications useful. Trying to determine the significance of email messages on the G Watch’s tiny screen was an exercise in frustration, and it was similarly difficult to deal with Twitter notifications. Most of the time, I just ended up hitting the button to open up messages right on my Android phone.

Despite Google’s thoughtful implementation of notifications in Android Wear, right now it feels like a platform that’s better suited for specific tasks — like tracking your run or controlling music on your phone =– rather than receiving notifications all day. And as I mentioned above, it’s surprisingly useful for Google Now-powered voice commands.

Android Wear is the best smartwatch platform I’ve seen so far, but it’s nowhere near ready for mainstream consumers yet. And that’s going to be a big problem for every upcoming Android Wear device, no matter how pretty it is or how many features are packed in.

Google has still yet to prove why consumers really need an Android Wear smartwatch, even though doing so is essential to making the platform a success. And time’s running out: Once Apple unveils it’s rumored iWatch, Google will lose its early advantage. 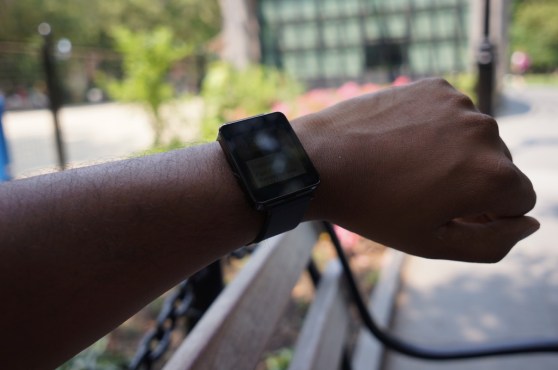 If you’re eager to get your hands on an Android Wear device, I’d suggest holding out until the Moto 360 hits the market (it’s expected later this month). At least then you’ll have a choice between that smartwatch and Samsung’s Gear Live.

The G Watch could be an interesting gadget if it gets a steep price drop — and given just how quickly the competition is heating up, I wouldn’t be surprised to see the G Watch for under $150 by year end. Just like how HP’s terrible TouchPad tablet became wildly popular when its price dropped dramatically, the G Watch could find a new life among deal hounds.

But if that’s the best you can hope for with your shiny new gadget, then something has clearly gone wrong.