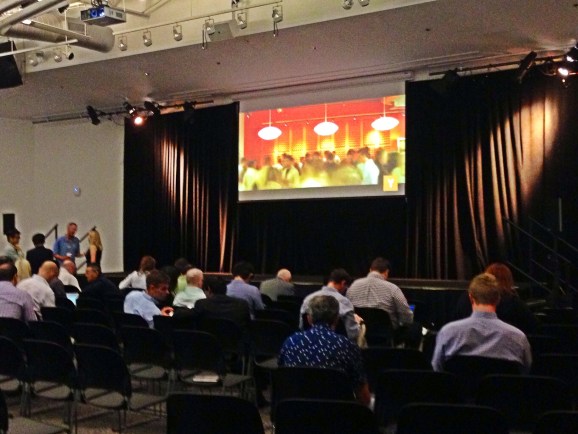 MOUNTAIN VIEW, Calif. — Y Combinator’s Demo Day for its Summer 2014 batch is in full swing, and a few startups have already impressed us, for various reasons. Take a look:

Checkr is a API for background checks, and we’re pretty sure Uber (and Lyft) wish it existed a long time ago. The company aggregates information from various sources including credit bureaus, DMV, third party national criminal databases, sex offender registries, OFAC, criminal record state repositories, and county courts, co-founder Daniel Yanisse told VentureBeat in an email. Currently, Checkr’s customers include Instacart, Shyp, Caviar, Doordash, SpoonRocket, and many other services that employ small armies of people for deliveries or similar interfacing with customers that require a level of trust. And although these are the customers the company is servicing currently, Checkr has a bigger vision: It wants to be the “trust layer for the Internet.” It has started with online employment then plans to move into all background checks and eventually provide online trust verification for anything from Airbnb customers to online dating.

WalkSource is the software airlines have but hotels don’t. When you arrive at the airport and your seat has been double-booked, the airline employee can easily find you a seat on another flight or airline simply by checking on a computer. Hotels also double-book rooms quite frequently, yet are still manually calling and walking guests to other hotels. Since it launched in the Bay Area in February, WalkSource now has a presence in more than 200 hotels in 33 cities. The company’s software is also very good at finding hotels’ exclusive inventory, the company said during its presentation. And along with using that inventory, it could eventually begin to sell that information to marketplaces like Hotel Tonight and Priceline, an additional revenue stream from the $21 billion hospitality market.

Bikanta is one of the health startups in Y Combinator’s current batch, and it’s going after cancer — early cancer detection, to be exact — with its nano-diamonds. “Almost half the population develops cancer,” said co-founder Ambika Bumb during the presentation, adding that the earlier cancer is detected, the better the chances for the patient. In short, Bikanta’s nano-diamonds are “miniature flashlights used to shine light on problems” (100 times better than current technology). Bumb developed the tech during her time at the National Instituted of Health, and Bikanta actually holds the key patents for this technology. Bikanta sells its tech to other research labs and has already snagged UC Berkeley, Stanford, and the National Institute of Health as customers.

Zen99 surprised us today, to be honest. The company provides human resources software for contractors. Contractors, such as the fine folks working as Uber or Lyft drivers or as Task Rabbits, need to handle their taxes, benefits, and other pesky employment needs on their own, and most people have no idea how to do this. Co-founder Tristan Zier previously worked for Exec, which dispatched housecleaners, and knows this first hand. “Even if companies wanted to help their contractors, they legally can’t because of employee-contracting laws,” said Zier. Zen99 offers its software for free to contractors and makes it money as an insurance broker.