Tucked into one of Columbia University’s bioengineering labs, 25 high school students are vigilantly poring over salad spinners, pipe cleaners, circuit boards, and solar panels. They are trying to build solutions to some of the many problems plaguing under-resourced communities around the world, such as lack of lighting, contaminated water, and even dangerous childbirth.

This is the Hk Maker Lab, a project of Christine Kovich and Sam Sia, co-founders of biotech incubator Harlem Biospace. The program teaches a selection of high school students from New York City’s most underserved communities the basics of engineering design.

Each group will present their product to a panel of judges from New Leaf Ventures, Microsoft, New York City Economic Development Corp., Cognizant, and Google. The winners will have an opportunity to develop their product further at Harlem Biospace.

When I met up with Kovich outside of Columbia, she was wearing black cycling skorts and a windbreaker, her blond hair tied back, prepared to run between Hk Maker Lab and her elementary school program called Hypothekids.

“Part of a bigger problem is providing a comprehensive program for kids to get STEM education and job readiness. Kids don’t have these items in their curriculum, and schools don’t have the resources,” says Kovich. “And even if they go into STEM majors, they don’t finish,” she says.

Both of her programs are based on Next Generation Science Standards, a framework for teaching science to K-12 students developed by the National Research Council of the National Academy of Sciences. The program takes an investigative approach to the curriculum, teaching across science (rather than in silos like “Biology” and “Chemistry”), and shows young people how science applies to in real life.

Hypothekids is a collaboration between New York City’s Economic Development Corp. and Harlem Biospace. This summer it introduced a crop of children as young as six to scientific method learning over the course of six weeks.

Hk Maker Lab is the high school version: a creative laboratory filled with high-tech equipment and research tools that teach teens how to invent solutions to real-world problems.

The program is taught by the tall, dreadlocked Dr. Aaron Kyle, a lecturer and teacher at Columbia’s University’s Department of Biomedical Engineering. The Maker Lab combines traditional classroom learning with guest speakers — and a heavy amount of lab time.

What further sets Kyle’s class apart from traditional learning is that it focuses on the design and function of biomedical products. Kyle wants his students to consider whether their products are user friendly — something that often is forgotten in the development of bioengineered wares. 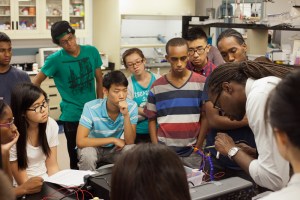 When I visited the lab, the kids were clustered into six groups each laboring over a different product. One crew was bent over a baby doll, trying to develop an alternative to a vacuum extractor; this device sometimes used during childbirth to assist the birthing process when the mother can no longer push and/or other health issues have arisen. Most modern hospitals deliver the infant with a cesarean section in these cases, but in under-resourced hospitals, surgery can be exceedingly dangerous. Vacuum extractors have their own set of risks, but are low cost and comparatively safe.

The group took a latex balloon filled with Poly-Fil micro beads and fit it around the doll’s head. When they suctioned the air out of the balloon, it made a soft, snug fitting cap on the baby’s head. This same process, called granular jamming, is used in robotics for grabbing tools.

When I asked the children to describe the difference between Hk Maker Lab and regular science class, they told me that it was a lot more time in the lab than they were used to. But one student named Akil explained that it wasn’t just more lab time.

“With school you always do something and you know the answers. With this you don’t know what the answer is going to be,” Akil said.

Over the course of six weeks, the children at Hk Maker Lab designed some simple yet brilliant devices, including a UV light water purifier and a solar powered lighting system that runs for 10 hours straight without a recharge.

The success of these projects may have to do with the amount of resources an institution like Columbia can provide. But it also might be a matter of the teaching. What further separates Hk Maker Lab from traditional science programs is that it’s all applied learning. That means young people are using math and science to solve tangible problems rather than using textbooks to solve abstract theories and equations. What’s more, they’re enthusiastic. It’s learning without the boredom.

As the children tinker, I muse to Kovich that it would be great to have this kind of education in all schools. “Wouldn’t that be amazing?” she said, a big smile crossing her face. “But that would be too resource intensive,” she said dampening.

The rise of tech and Internet companies over the last decade has led to an increased focus on jobs in science, technology, engineering, and mathematics (the STEM disciplines). Some, including President Obama, say that there just aren’t enough tech workers to fill all the high-paying STEM jobs out there — though there is certainly some disagreement about that. Still, the government (state and federal), as well as big tech companies like Microsoft and Google, are dumping money into preparing the next generation of tech workers.

As a result, tech communities are focusing on schools, where for many years STEM programs haven’t been given much attention.

Tech companies also have a diversity issue, creating an incentive to reach out to children in poorer economic regions where minority populations are higher.

But funding programs directed at schools in these areas is tricky. Unless a company funnels money directly into the Department of Education, it’s forced to choose an individual program, which will ultimately fund a tiny selection of students from under-resourced areas.

Kovich admitted that choosing students for Hk Maker Lab is difficult. “You can’t pick kids from low-performing schools because they’d be lost,” she says.

And that leads to a sticky problem: Are programs like Hk Maker Lab really helping the ones who need it most, or are they giving an extra boost to those who are already ahead of their peers in STEM education?

Hk Maker Lab’s students came from schools with STEM programs in under-resourced areas like Frederick Douglas Academy I in Harlem, which is rated near average in the New York City schools system. In other words, the children chosen for this program already have access to a decent STEM education. So what Hk Maker Lab offers is basically a free program for students who otherwise couldn’t afford this kind of experience.

“These programs are at best likely to reinforce skills and interests, and they may not have any effect. And the in the mean time, the vast majority of kids have the same sort of mind-numbing experience in math and science, because of the fact that they’re in under-resourced schools,” says Rosyln Mickelson, a professor of sociology at the University of North Carolina in Charlotte.

While small specialized programs are important, they don’t do much in the way of beefing up STEM education for those who aren’t receiving it adequately. Most of the students I interviewed at Hk Maker Lab already had plans to pursue engineering or computer science at the college level.

There are plenty of other STEM-related extracurricular programs and camps that recruit students from New York City’s public schools, such as NYCEDC’s Generation Tech. The program teaches 40 children, with no coding experience, how to code every summer. But that’s only 40 out of New York City’s more than one million public school students.

“Ideally our programs would touch every student, but one of our main focuses are providing a pathway to the middle class” says Ian Fried, a spokesperson for the EDC. “We are the Economic Development Corp. and not the Department of Education. [Our] goal is to help a group of students to become prepared in a niche field and to help get their foot in the door in these fields,” he says.

Using outside school programs to make up for the lack of education happening year round in the classroom is certainly one way to address educational disparity, but its not likely to make much of an impact in the larger scheme of things. Ultimately, to really afford students equal educational opportunities, the city needs to improve the quality of science and math education in all of its public schools.

Next step: Teach the teachers

However, sometimes baby steps are key. Talking to the children in Hk Maker Lab, it’s clear that Sia and Kovich hit their mark. These kids are hooked.

Ultimately, Sia and Kovich have bigger plans. Next year the program will select teachers from certain schools to learn alongside the students, so they can take what they’ve learned back to their classrooms — hopefully bringing these applied teaching methods with them.

That progress may only affect a single classroom at a time, but the program may prove effective at keeping students on the STEM path after high school. Some 58 percent who declare a health science or computer science college major defect halfway through the program, according to Complete College America.

The final week of the program, all 26 students gathered at Davis Hall Auditorium to present their prototypes — as well as business plans for companies based around these potential products. They had identified target customers, likely funders, and more.

When they announced which teams will go onto develop their product at the Harlem BioSpace, one girl shouted, “Yes!” over the crowd.

It’s sad we can’t provide more children with engaging education opportunities. But at least there’s hope that once connected to programs like Hk Maker Lab, students will stay excited about biotech engineering at the college level.