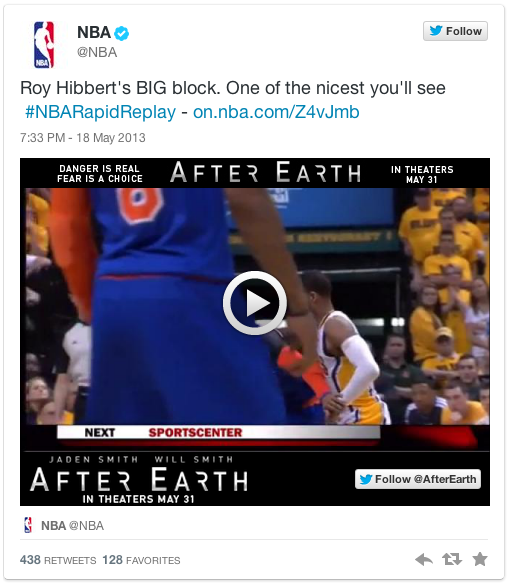 From the addition of video into the newsfeed to sponsored tweets, Twitter has recently been making changes to what its 271 million users see on their stream. Now the social media platform is doing its best to ramp up its advertising revenue — and to tweak what tweets its users see, in order to compete more effectively with Facebook.

By and large, the company’s efforts are working. Last year, Twitter demonstrated how promoted tweets can help to boost offline sales by 29 percent. In July, VentureBeat reported that Twitter had doubled its ad revenue in the previous quarter. And earlier this month, we learned how Twitter’s new video cards are changing how consumers and brands can interact with and embed video content into the Twitter stream.

Beyond these examples, Twitter has also rolled out sponsored profiles, which allow any user to pay to have her profile promoted, as well as  recommended tweets, which can appear in your stream when someone you follow has favorited that particular tweet.

So far, these adjustments to the tweet stream are relatively minor: Adding a few tweets here and there, not filtering the stream as a whole.

This is a markedly different strategy from Facebook, which heavily filters its feed using EdgeRank, an algorithm that determines what is displayed and how high it appears in a user’s newsfeed. By contrast, Twitter’s news feed is almost entirely unfiltered.

But these additions are definitely a change in the way the Twitter newsfeed is presented.

Much of this is experimental, as you might expect. You might get the impression that Twitter is on a path toward deviating from its ever-updating, stream-of-consciousness style stream. In fact, the notion that people can’t mute promoted tweets sounds a lot of alarm bells in the “This is just like Facebook” department.

“The thing that makes Twitter unique is its live feed,” says Danny Wong, growth hacker for Shareaholic, the creator of popular social sharing buttons that appear on many websites. He believes that Twitter’s current experiments with how it presents its newsfeed are “doomed to fail.”

“Surely it’s concerned with the fact that it drives less referrals to sites than Facebook,” says Wong, noting that Facebook accounts for 23 percent of Shareaholic’s referrals, while Twitter has just 1 percent, according to a July report.

But Twitter also must be concerned with how overwhelmed people get simply trying to keep up with the ever-moving stream of their feeds.

“Many tweets go unread and aren’t resurfaced the same way Facebook does it,” Wong says.

Whenever two platforms are going head to head to increase their user bases, there’s usually a rule in play: When one introduces a new feature, the other(s) will follow suit.

“I think the exception to the rule for this is EdgeRank,” says Stacey Miller, keynote speaker and the senior social media community manager for the Vocus Marketing Suite business line. She doesn’t believe Twitter wants to become more like Facebook when it comes to that algorithmic aspect. “Twitter is such a powerful micro-content network. … Filtering news feeds based on an algorithm rather than the preference of viewing the firehose would probably be a turnoff for power users,” she says.

She’s also quick to note that you can easily create lists of people you want to pay particular attention to on Twitter. If you want a narrower focus, you can access that already — you just have to create a list or subscribe to someone else’s list.

“There is so much outrage around the Facebook algorithm, both from consumers as well as brands,” Miller says, “I’m not sure Twitter will take such a risk to filter relevant content.”

Feed filtering algorithms just aren’t very Twitter to start with. It goes against everything Twitter promotes itself to be — your up-to-the-minute view of the world. It’s all about real-time updates and interaction, not algorithmically calculated lists of what the systems thinks you’d be most interested in. No, that’s Facebook’s realm, and most experts across all areas of social media agree that Twitter would be foolish to dip its toes in EdgeRank-like waters.

However, there is some argument in favor of an EdgeRank for Twitter.

“There is a lot of noise on Twitter, and at some point there is going to need to be a way to filter that noise out,” says Tom Spano, former head of global event marketing for Twitter. While he’s certain the company is already working on a system similar to Facebook’s to filter out relevant content, he notes that there are many things users can do right now to filter the noise. “For example, you can choose which languages you want to see your Tweets in, and you can mute or block users to keep them off your feed,” he says.

To sum it up? A combination of more of the same and more targeted, custom-tailored content. At least, that’s according to the social media experts we talked with.

Aaron Strout, a digital social strategist, believes that location, via self-reported and geo-tagged tweets, “will play an increasingly greater role in how tweets get targeted and delivered to end users.” People would have the ability to opt-in or opt-out of this feature — but, he says, “the onus [would] be on brands making their content that much more relevant.”

Spano thinks one of the biggest issues with the current Twitter newsfeed is feeling that you always have to be on it “for fear of missing out.” Hashtags help remedy some of this, he says, but there needs to be another way to “elevate” the most relevant content for specific users.

“Rather than creating user lists of important follows, which may be too technical for many users, these tweets will instantly rise to the top of my feed when I log in based on my choosing,” Spano says.

Twitter’s role in customer service can’t be discounted either, says Spano. In the near future, “[w]e’ll see a lot of companies heaving up on their inbound community managers to handle the influx of demand from customers wanting real-time, instant satisfaction regarding issues,” he says, noting that “the days of calling in and waiting on hold are over.”

Of course, much of this is just speculation. But one thing remains certain: Twitter can’t just use an EdgeRank knock-off to build relevancy in its newsfeed. A different, more subtle approach is required. One that maintains the spirit of Twitter but moves the social network forward, too.

A tough balance, to be sure. It’ll be interesting to see what stays, what goes, and what’s on the horizon.