Websites are so passé, it’s all about mobile the new mantra goes. In an effort to bridge the gap between web brands and mobile apps a new app is emerging today on iOS from a startup called Dwnld.

“I want everyone to be able to have an app and that’s the way that I see it and I think that if it’s not affordable then it’s not something that people will utilize,” says Alexandra Keating, founder and CEO of Dwnld. Keating is tall and frank in manner. She makes eye contact throughout the conversation, laying out her product with a take-it-or-leave it attitude.

For $15 a month, Dwnld gives brands and celebrities their own app: an aggregation of their blogs, social feeds, and RSS feeds fit into an attractive little mobile app package. Customers upload their content, choose from a series of templates and design choices and then Dwnld submits the app to Apple on their behalf.

It’s no coincidence that Dwnld is debuting during fashion week. For Dwnld CEO Alexandra Keating it’s all about brands. In addition to the fashion houses, she’s currently stalking movie studios and celebrity chefs. “So that every single app for every single film they come out with, I’ve got it. We’re trying to do deals with major [TV] networks that have on multiple chefs, because we want every chef to have their own app,” she says.

Hiring mobile app developers to build an app is incredibly expensive, putting that kind of project out of reach for some budding brands and personalities. However, there are already countless services that will make you an app for as little as free. Perhaps most comparable is GoodBarber, a design-centric app maker that can make an app in four steps and costs $16 a month (up to $48 for more advance offerings). Still, mobile apps haven’t quite picked up for personal brands yet, leaving room for intrepid innovators to break ground. 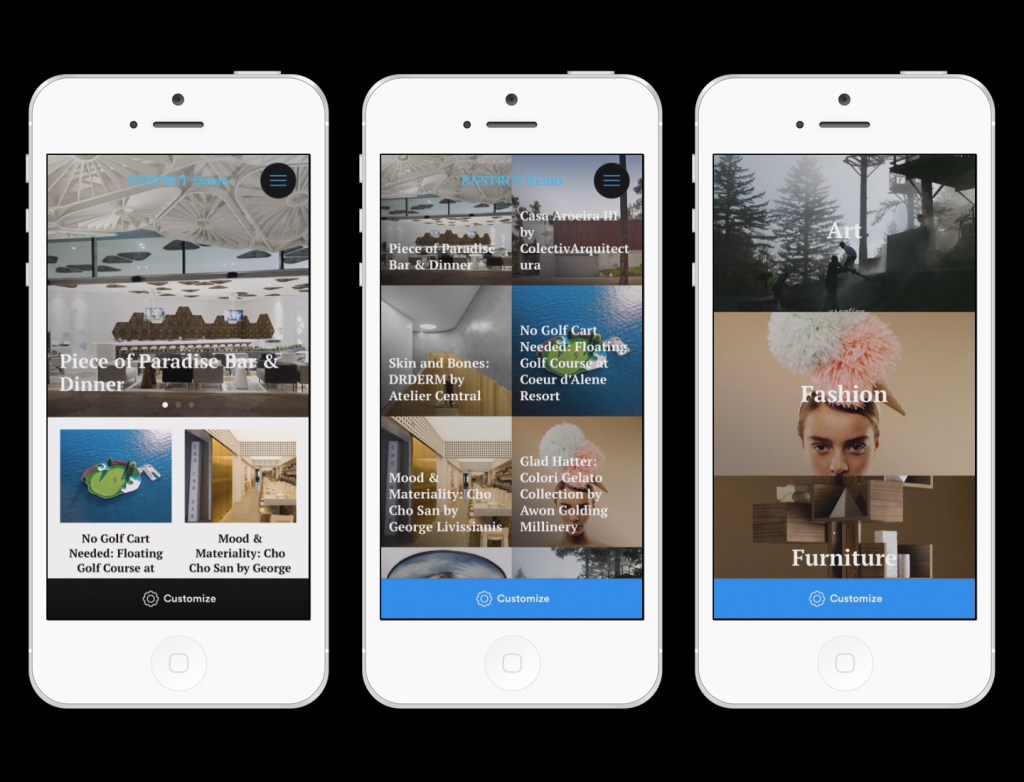 Where Dwnld might succeed is in its dogged pursuit of fashion celebrities, chefs, and YouTube personalities. A former marketing VP at Thrillist, Keating is very familiar with working on digital products. And as the daughter of a former Australian Prime Minister, she’s familiar working in the limelight — like many of the people she’s seeking to onboard.

The company gives users a few different templates to host their content on and allows them to choose a color scheme as well as where the site should pull data from. So far Dwnld has 200 brands under its belt including model Coco Rocha, reality TV star turned fashion designer Kristin Cavallari, and food blogger Joy the Baker.

“Apps might become the new blogs, and there’s going to be no separation between commerce and content,” said Keating.

“I want everyone to be able to have an app … and I think that if it’s not affordable, then it’s not something that people will utilize,” she said.

Flipping through Design Sponge’s Dwnld app is as addictive as scrolling through its website, but I can do it in the palm of my hand in an elevator. For those who aren’t familiar, Design Sponge is a website full of home design-porn and DIY projects. The app is simple: three rotating stories at the top and then a whole list of entries below, each identified with an icon.

The real power of this app is its potential as a vehicle for advertising. Dwnld incorporates existing in-blog advertising through affiliate linking, but you can also add advertising to your app through Dwnld. And that goes for in-app sales as well. Kristin Cavallari does product reviews, for instance, each of which link to product pages where you can buy the product while staying in the app (Keating is big on deep linking). “When you have a thing that got sold, when you login through Dwnld, we identify what went through the app, what percentage of the sales came through the app.”

Metrics are important for brands, allowing them to renegotiate ad rates based on impressions and sales figures.

Keating also wants to play a role in getting app owners better advertising dollars. “So we’re going to collectively say we control the mobile assets to these brands. If you want to get into bed with us, you need to give a better deal,” Keating says.

Make no mistake, Keating is serious about the role Dwnld will play in mobile media. And she has big plans for its evolution. Like integrating with FreshDirect. Let’s say you’re reading Joy the Baker’s app and decide you want to order the ingredients for one of her recipes for a dinner party you’re throwing the next day. Eventually, you’ll be able to make that order directly from Joy the Baker’s app through FreshDirect. Which makes you wonder, what else could they integrate with?

Dwnld has a lot of potential, not only as a democratizing agent, getting more content from personal brands into the hands of the masses, but as a tool for bridging content and shopping in a single window. But, as with websites, not all of these apps will be great. Dwnld just gives you the basic tools, which right now are fairly limited, to make an app. Coco Rocha’s app, for example, is just pictures of her from photo-shoots and Fashion Weeks past. It doesn’t link to her blog. So while it’s great eye candy, it’s not a great use of what Dwnld offers.

In order to make Dwnld work, you have to bring in beautiful, compelling content, and hopefully product sales.

The New York based company was founded in 2012 by Keating and Fritz Lanman, a former Microsoft executive, who also invested in Square and Pinterest. Since its founding, the company has raised $2 million from William Morris Endeavor, The Chernin Group, and Crunchfund.