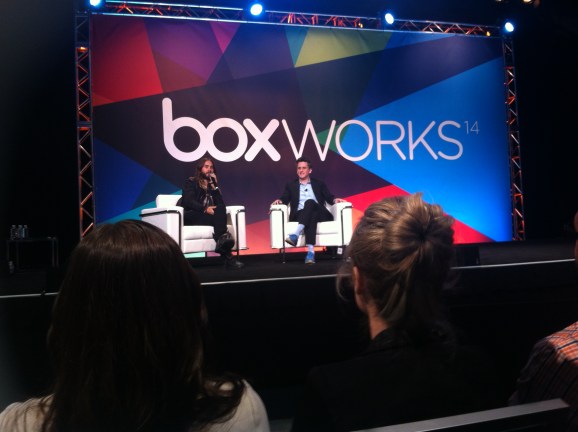 SAN FRANCISCO — Box won’t just wait for companies to start paying for its cloud-based file-sharing service. It’s picking through bits and pieces of its increasingly vast toolbox of technological goodies and assembling custom creations for individual industries, so it can sell software for companies’ real tasks.

At Box’s annual BoxWorks conference today, chief executive Aaron Levie trotted out executives from Box customers in retail and health care — as well as even Oscar-toting actor, musician, and Box user Jared Leto — to demonstrate Box’s value in the present and the future. It’s less about storing files in the cloud. It’s more about helping companies assemble news releases, keeping everyone up to date on the latest merchandise, and keeping all doctors in sync of patient care.

The new strategy could help more companies understand and pay for Box, as well as distinguish the company from its competitors. But it could simultaneously make Box’s nearly 10-year-old regular service seem less distinct in comparison with the company’s new stuff. To go vertical or not? It’s a question Levie and his fellow executives have wrestled with for two years, he said in a press conference. And the outcome of that wrestling is a complicated middle ground.

“Our job is to build out a horizontal platform that can be tailored at the feature level or at the platform level for different verticals,” Levie told reporters.

That self-anointed job will be critical to watch in the next year or so, as Box deals with price and feature pressure coming from technology giants with cloud file-sharing services, including Google, Microsoft, and most recently, Amazon.com. While Box can catch attention through its new Microsoft Office 365 integration, its Workflow system for creating rules, and other features, the vertical strategy is the big news of the day.

It’s the new rocket Box is unveiling to help it grow much bigger, long after it starts to be traded on public markets (a milestone to expect, by the way, in the next few months).

But the new strategy has its roots in an old one. Box has previously eyed specific industries, having launched initiatives on health care and education. The vertical-specific strategy continues today, with a notable overlap on health care.

Levie made it sound like the choice of industries to go after initially wasn’t especially meaningful.

“Honestly, it’s unfortunately a very simple answer,” Levie said in the press conference. “It was just the nuance of giving a keynote. We wanted to focus on three sort of end-to-end use cases. … Today we just chose to focus on three we had a certain degree of depth in.”

Box has targeted universities and education, Levie said, of which the company has hundreds of customers. Over the coming months, he said, Box will come forward with similar announcements about other industries.

And it won’t be going vertical alone. Box has tapped major consulting group Accenture to push the Box for Industries services into large enterprises. That’s the sort of thing you’d expect from a major publicly traded software vendor like, say, Salesforce.com. The alliance hints at Box’s determination to get traction with the new industry-specific software. Note that the partnership isn’t around some previous Box feature or service, like, say, the Box Notes note-taking tool. Because this directional shift is big, it needs to pay off.

“We wanted to really adapt our strategy to where this market is going and make sure that we can always stay ahead of this trend,” Levie said.