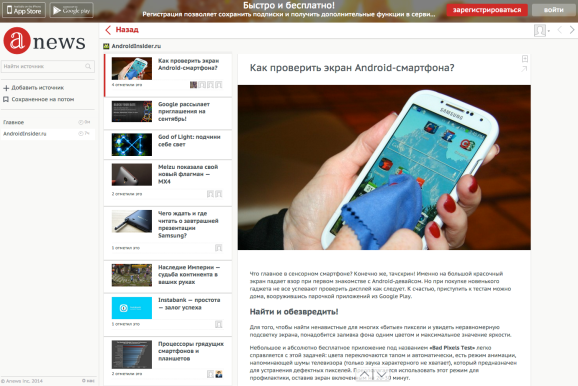 Asserting itself as one of the most active Russian-backed funds operating internationally, TMT Investments announced during this month the completion of two investment deals, in addition to a small exit.

The fund, which usually invests just a few hundred thousand dollars in each project, has injected a hefty $1 million in Anews, an international global news-reading service with a built-in behavioral advertising network. In exchange, TMT is set to receive 9.09 percent of the startup’s fully diluted equity capital. TMT’s investment came as a part of a $3 million round, which involved other unnamed investors.

TMT also took part in the latest $3 million equity funding round of its portfolio company Adinch. An international mobile advertising network with an RTB (real-time bidding) self-service platform, Adinch claims to provide instant access to over 200 billion monthly ad impressions in 230 countries, on more than 200,000 mobile apps and mobile websites.

The startup was launched in Russia but incorporated in Delaware in 2012. It now has offices in San Francisco, Moscow and Kiev.

TMT, which had acquired a 20 percent stake in Adinch last year in exchange for a $1 million investment, has injected an additional $600,000 in the present round along with unnamed investors. “We wanted to maintain our original stake at this stage, because we believe in the company’s future,” stated TMT Investments Executive Director Alexander Selegenev in an exchange with East-West Digital News.

In March 2014, 101 Startup also invested in the company. Following the latest round, the two investors will hold stakes of 20 percent and 45 percent in the company, respectively, based on an equal $9 million equity valuation.

According to TMT executive director Alexander Selegenev, the fair value of the fund’s original investment in Adinch has increased by 80 percent, or approximately $800,000.

An exit with 32 percent IRR

In early August, TMT also announced the disposal of its investment in The One-Page Co., a San Francisco-based startup that develops software solutions to solve communications problems between enterprises and their employees.

Founded by the executive management team previously behind RBC, a major Russian financial information holding, and traded on the AIM market of the London Stock Exchange, TMT has raised $30million since its inception in 2010. Its portfolio includes more than 35 internet-based companies worldwide.

Earlier this summer, another investment from TMT went to Le Tote, a San-Francisco-based fashion rental site that defines its mission as “to become the leading fashion discovery platform where women can access, learn about and shop the best fashion every day.”