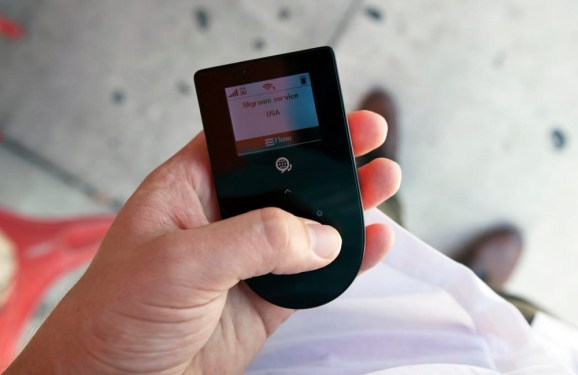 Skyroam is launching a unique mobile data platform that allows you travel without the fear of running up huge data charges overseas.

Business travels often find that when they use mobile data overseas, they return home to find a severe case of bill shock. If you turn on your smartphone to read email, you can get hit with huge roaming fees.

But Skyroam will charge only $10 a day, on a pay as you go basis. It does this through a unique technology that allows it to change mobile carriers even if you don’t change your mobile SIM (subscriber identity module) card, or the little card that fits in your smartphone and contains your mobile phone ID.

Now you’ll be able to use the new feature of the Skyroam 3GMate global mobile hot sport to bring connectivity to all of your mobile devices, such as a smartphone, tablet, digital camera, or fitness device. It works on mobile data, but not on mobile voice. However, you could use a Skype app on a mobile device to make an inexpensive call over a mobile data connection.

“The goal started with the problem of international roaming,” said Eric Plam, vice president and general manager for North America at Skyroam, which is based in Shenzhen, China. “Roaming just isn’t an efficient business model. You have the potential to get a $3,000 roaming bill, and that’s called ‘bill shock.'”

The company announced the new service at the Cellular Telecommunications Industry Association Super Mobility show in Las Vegas today. Skyroam introduced its original 3GMate global mobile hotspot to give international business travelers and tour group customers access to inexpensive mobile data service while traveling overseas. A year ago, it launched the platform as a monthly subscription, and thousands of users are using that service.

Now travelers have an option for a pay-as-you-go service by buying the 24-hour day pass. If you’re traveling to a bunch of countries, it simplifies your life, as you don’t have to buy a bunch of separate physical SIM cards for each country.

Skyroam has created what it calls a virtual SIM (vSIM) technology that delivers fast speeds with local data routing at a low cost. It also has encryption to keep sensitive data secure. These vSIM servers virtualize SIM cards from carriers around the world, over the cloud and on demand. The company can do this by contacting carriers in each country and buying data service on a wholesale basis in each country.

“This is the better way to do it and it’s the technology that we have worked on for a couple of years ago,” Plam said. “We can change technology on a wireless device over the air. We manage the carriers on the back end. The obvious solution that we are providing is powering a mobile hot spot.”

He added, “When you travel, the virtual SIM makes a query to find out what country it is in. It pings our server. We remotely deliver a virtual SIM card to that device. That’s how it works.”

By contrast, roaming on a normal mobile data service is expensive because the smartphone has to fetch the data from servers in the person’s home country, such as the United States. That data is sent over the data connection at rates that are expensive. Then it is sent back from the home carrier back to the user in the other country. That can cost the mobile user about $20 per megabyte of data used on carriers such as AT&T and Verizon Wireless.

“For international travelers, this cost might be 10 percent of the cost of other options out there,” Plam said.

With the patented vSIM, Skyrim enables a wireless device switch carriers on the fly, remotely. It then has the device fetch its data from servers in the local area where the person is traveling.

“In a connected world, people need options for data access when they are traveling internationally,” said Plam. “We deliver a local carrier experience. We are not sending all the traffic back to the home country.”
The wearables are increasingly a part of this kind of problem, as people have trouble uploading data from fitness devices — which track how much you sleep or how many steps you take in a day — while on the go. Skyroam also eliminates the practice of using multiple phones for different countries.

You can schedule Skyroam to work in advance of your overseas trips in 45 countries. Customers can also buy them during trips using major credit cards and PayPal. Corporate subscription plans are available for enterprises.

As an alternative, you can use WiFi locations overseas. But many of those locations are traps, created by hackers to capture your keystrokes. From a security point of view, overseas WiFi can be dangerous, Plam said.

The company was founded by Jing Liu in 2008 in Silicon Valley. He moved the company to China in an effort to maximize development resources. Skyroam has raised $10 million on two rounds from investors including GSR Ventures.

Skyroam’s 3GMate works with 802.11b/g/n and supports unlimited data on up to five WiFi enabled devices. And it works with technologies including: