CUPERTINO, Calif — Apple unveiled its long-awaited smartwatch today, the Apple Watch, to a standing ovation from the press.

“Apple Watch is the most personal device we ever created,” said Tim Cook, chief executive of Apple, at a press conference. “It works seamlessly with iPhone and is also a comprehensive health and fitness device.”

The Apple Watch has a flat screen and a “digital crown” twisting control (like the old-school wind-up wristwatches) that lets you easily scroll through different functions. It runs apps, takes dictation, and interacts with your iPhone. The watch uses “digital touch” to communicate with other smartwatches, which means you can share your own heartbeat with a friend or physician.

In addition, it has a gyroscope and an accelerometer that measures your fitness, such as how many steps you take each day. But it also taps the navigation information in your iPhone to provide even more information to your health data, such as location.

You can customize the flat display on the watch face; it has a variety of colorful wrist bands and cool visual styles, such as a hand-crafted gold buckle.

Cook invited Kevin Lynch, a new Apple vice president, to demo the watch live on stage. Lynch showed off an app that let’s you look at the planets and get information on the moon’s position. You can even zoom in and zoom out of the solar system. After that, you can switch to your music app. Listen to the tunes on your (always connected) iPhone, or listen to music directly from your watch.

The Apple Phone’s haptic technology works with apps, for example, a map app. Set your destination on the watch. When you need to turn left, the watch will vibrate on the left side. That’s pretty cool (even if it appears to work only for those who need directions when walking). The haptic technology also comes into play when you send someone else your heartbeat data.

The watch also has near-field communications, or NFC, capability. You can use the watch to unlock your hotel room at Starwood hotels. With a Nike app, you can challenge a friend to a run.

Apple Watch works with Apple Pay, a new digital wallet. Using NFC, you can hold your watch next to a payment platform at a cash register and automatically pay your bill.

After Apple releases the SDK to more developers, they will be able to create their own Apple Watch apps. We assume there will be a watch section on the app store for them.

Here’s a closer look at the new device (more, after the break): 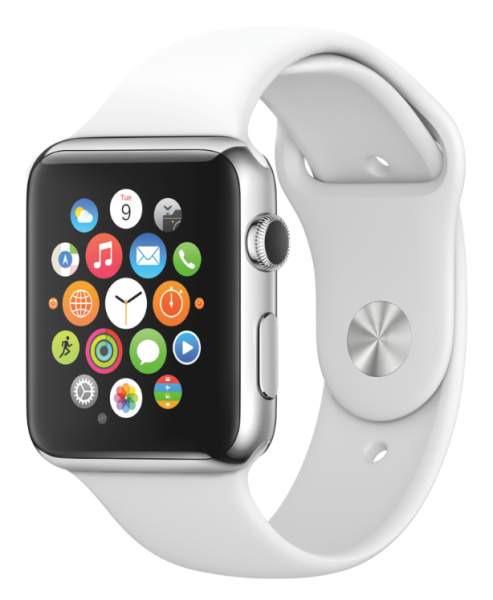 Apple faces a ton of competition in the smartwatch market, including Nike’s Fuel Band, the Basis Band from Intel’s Basis Science division, and Samsung’s devices. Samsung has created a platform, dubbed SAMI (Samsung Architecture Multimodal Interaction), which the tech giant says is designed to “sit between devices that collect data and algorithms in the cloud that analyze that data.”

I’ve worn the Basis Band for more than a year, and it has the LED light that shines into my wrist. That allows it to measure blood flow and deduce from that what my heart rate is. From that, Basis is able to estimate whether I am walking, running, or cycling. That information is transferred to the cloud via an iPhone or a USB cable. In the cloud, Basis can tell me how many steps I take in a day. And since it measures heart rate and position, it can tell if I am sleeping. So the cloud data tells me how much sleep I get … or fail to get.

That’s pretty good data that people who follow the “quantified self” movement would love to have. That kind of person who wants self-knowledge through numbers is kind of a rare bird. But Samsung says that its LED detectors will be able to gather information about your estimated blood pressure. From that information, it will be able to predict whether you’re angry or even at the risk of having a heart attack. That kind of information can turn out to be useful, preventive information. But we’re not there yet, as Samsung hasn’t launched any products for the platform yet.

Apple will likely pursue the same kind of strategy of providing useful information that can help you improve your health or even save your life. However, many of the competitors in this market haven’t gotten traction.

Journalists and industry observers have expected Apple to announce a health wearable device for months. But recent reports suggested that the Apple Watch would not released until 2015. Now we know: It will be available early next year starting at $349. Cook said, “It will be worth the wait.”

Although many predictions about the watch were correct, the one thing that was wrong was the name. It’s “Apple Watch,” not “iWatch.” Watch yourselves when you say it.