Since the passing of Steve Jobs, many have wondered whether Apple would be able to innovate in a new product category again.

Following the return of the Apple co-founder in 1997, the company began hitting a series of home runs that appeared out of the Bondi blue with the release of the iMac and continued with the iPod, iPhone and iPad. Marketing SVP Phil Schiller criticized the skepticism early last year when he introduced the new Mac Pro, a radical shrinking and rethinking of its workstation, when he exclaimed, “Can’t innovate anymore, my ass.”

But the Apple Watch has been the action that’s spoken louder than his words. In introducing the timepiece, the company has in some ways continued working from its playbook, integrating thoughtfully and beautifully designed hardware and software with a new user interface method.

As the company noted, the product isn’t a shrunk-down version of the now larger iPhone. We have, however, seen some trends continue from the evolution of the Mac to the iPhone to the Apple Watch. Take, for example, the the simplification of app launching. On the Mac, double clicks open an icon in the Finder. On the iPhone, it’s a single tap. On the AppleWatch, one needn’t even tap at all. Simply continuing to zoom in on an app with the crown fluidly opens it.

But in other ways, the launch of the AppleWatch has been nothing like that of its predecessor. While the product will come at a significant premium over existing Android Wear devices and many other smartwatches, it is relatively inexpensive as far as new Apple products go. A base model will start at $349. In contrast, the original base iPhone model was $499.

Were you to compare an iPhone at its introduction to a traditional phone, cell phone, or even most smartphones, you’d have a hard time making the connection that they were in the same product category.

Apple dispensed with tradition and recognition, and even subverted the calling functionality to an app in order to bring a new kind of pocket computer to market. In contrast, while the Apple Watch of course uses a digital display, it is recognizable as a watch and Apple seems to have gone to great lengths to ensure that the time is almost always visible. Apple talked about how much it sought to preserve the essence of a watch.

That said, the Apple Watch may well turn out to be disruptive beyond the category as the iPod was, reshaping the music industry, or the iPhone was, disrupting the telecom industry.

The iPod took off after the release of iTunes for Windows, which also set the stage for the iPhone to be used by Windows users. As a result, Apple pulled many customers into its ecosystem that could not be won with the Mac’s small market share.

In contrast, the Apple Watch requires an iPhone, and so it’smuch less likely to bring customers into the Apple ecosystem. That said, the Apple Watch’s digital touch features may be the most social ones that the company has created with a launch product, and it signals the new appreciation for device-to-device communication. That’s something the company began focusing on with its Continuity features at WWDC, which allow you to exchange apps and data between iOS and OS X devices. It’s a sign Apple may be aiming to drive more revenue from already-acquired customers. 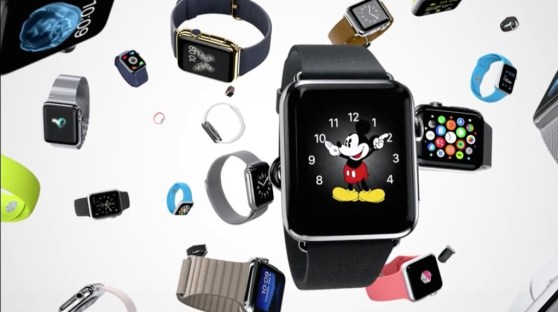 Spreading out the bet

But perhaps the biggest difference between the Apple Watch and previous Apple products in the modern era has been the number of models being launched, including three series (Apple Watch, Apple Watch Sport and the luxury Apple Watch Edition) spanning two sizes and a huge array of different watch straps that have clearly been thought of as products in their own right as opposed to accessories. It’s the first time Apple has entered a product category with such a broad array of discrete models and not just configurations. Indeed, with iMac, iPod, iPhone and iPad, it started with a single model.

What’s contributed to these changes has much to do with the particularities of developing a watch, which the company has described as its most personal product ever, and the growing maturity of its franchises.

As CEO Tim Cook succinctly put it regarding Apple’s status, “Everything is great.” What the product’s introduction ultimately shows is that Apple is adjusting its approach with the demands of the times, and that’s something Jobs would have certainly endorsed