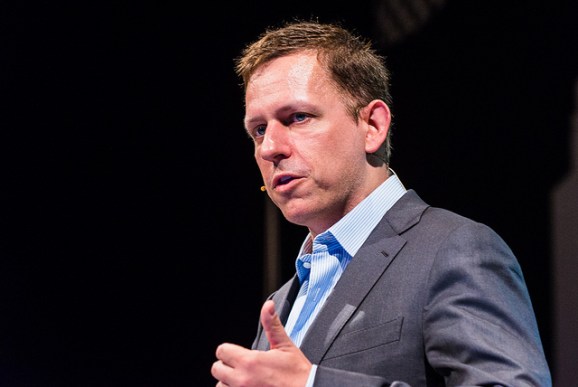 Silicon Valley’s favorite small-government billionaire, Peter Thiel, has come out against net neutrality, just a day after major websites staged a mass protest on the issue. He tackled net neutrality and a range of hot button issues in an “Ask Me Anything” session on Reddit today. Here he is his own, delightfully brief words.

“We’ve had these debates about net neutrality for over 15 years. It hasn’t been necessary so far, and I’m not sure anything has changed to make it necessary right now.

And I don’t like government regulation: We need the US government to regulate the internet about as much as we need the EU to regulate Google — I suspect the cons greatly outweigh the pros, especially in practice.”

This isn’t the first time Thiel has offered his thoughts on net neutrality, but it’s especially timely now that the Federal Communications Chairman will be issuing new rules to the determine the law’s fate. Thiel’s anti-regulation stance puts him at odds with most of his tech industry brethren, including Mark Zuckerberg.

“if you break the law to the point where the company gets shut down (think Napster). I’m not saying that will happen to Uber, but I think they’ve pushed the line really far.

Thiel, an investor in Uber’s competitor, Lyft, was referring to earlier comments where he called the ride sharing giant “the most ethically challenged company in Silicon Valley.” Uber has come under fire for tactics against Lyft, which include canceling rides and aggressive headhunting.

“PayPal built a payment system but failed in its goal in creating a “new world currency” (our slogan from back in 2000). Bitcoin seems to have created a new currency (at least on the level of speculation), but the payment system is badly lacking.

I will become more bullish on Bitcoin when I see the payment volume of Bitcoin really increase.”

This last sentence is key: Thiel wants more proof that Bitcoin is a viable alternative currency. He may be actively looking for an alternative to the U.S. dollar, but no alternative is good enough yet. Bitcoin continues to suffer from government regulation threats and wild swings in value.

“The zero-sum world [the movie The Social Network] portrayed has nothing in common with the Silicon Valley I know, but I suspect it’s a pretty accurate portrayal of the dysfunctional relationships that dominate Hollywood.”

Thiel’s main complaint about the fictional representation of Facebook in the movies is that the directors see a world full of conflict. Thiel, evidently, thinks the Valley is much nicer.

It is true that the infamous Winklevoss twins who sued Facebook for ownership hugged out their differences at Burning Man last year. I doubt that moment would have made the script if it were written today.