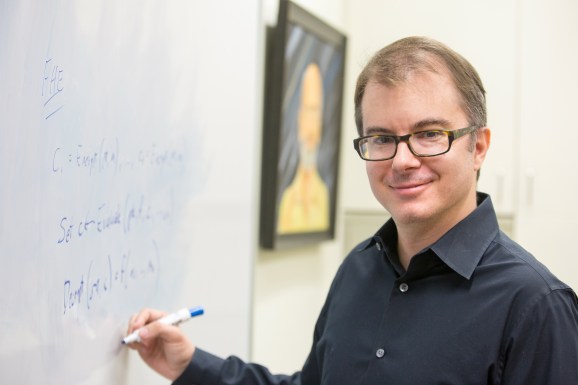 Craig Gentry didn’t grow up wishing to break complex encryption schemes and make new models of securing data for a living, but that’s what happened. And now he’s landed a $625,000 stipend as one of 21 recipients of this year’s MacArthur “genius grants.”

A research scientist at IBM’s Thomas J. Watson Research Center, Gentry was pleasantly surprised to learn this week that he’d been named a MacArthur fellow, he said in an interview with VentureBeat today. Even so, Gentry doesn’t expect the fellowship — an accomplishment so prestigious it tends to be mentioned in the first few paragraphs of the awardee’s obituary — to alter his course.

“I don’t see it changing my research very much,” Gentry said. “I enjoy what I’m doing right now, and I’m just going to continue doing that.”

In the five years since he joined IBM, Gentry has worked with cryptographers inside and outside the company to speed up the process of the approach he has advanced, known as fully homomorphic encryption (FHE), to make it more computationally efficient.

Because Gentry fully intends to keep pursuing the work, and because computing power will continue to increase, gradually the time could come when FHE could become a standard in cloud computing, where developers at companies don’t necessarily want cloud providers to be able to read or understand the data they’re being fed. And that could lead to broader adoption of cloud computing.

It helps that Gentry works for a company that’s been identifying cloud computing as a potential growth area and investing to grow its cloud capabilities. Perhaps IBM will commercialize FHE faster than other cloud providers. Or then again, competitors like Amazon, Google, or Microsoft will reach for it to make a better case that their clouds are secure and trustworthy.

Regardless of the supply of FHE in the years to come, Gentry suspects there will be demand.

Gentry joined IBM in 2009 after graduating from law school, doing cryptography research at Japanese telecom NTT DoCoMo, and getting his Ph.D. from Stanford University. Soon after coming aboard Big Blue, Gentry completed an implementation of FHE that could analyze data without actually decrypting it. But the system had its shortcomings. “Let’s say it was very, very slow,” he said.

The problem is, the encryption itself was getting in the way of the computing.

“What happens when you try to compute on the encrypted data is that as you compute, you’re adding and multiplying the ciphertexts, which are the basic operations you perform on the encrypted data,” Gentry said. “As you do that, the noise level grows and grows, until finally it overwhelms the signal, and the message is just lost.”

So the researchers took to finding ways to stop the volume from going up so fast. That way, they could run harder calculations on the data, making the encryption actually valuable.

When the noise got really bad, they could do something called bootstrap, which refreshes the ciphertexts and essentially quiets things down, Gentry said. But bootstrapping is a very expensive process of computation.

“If you could avoid it, you’d certainly like to,” he said. “Now, we can compute really complicated functions without using bootstrapping at all.”

That sort of achievement, which could have major implications, might have motivated the MacArthur Foundation’s anonymous nominators to select Gentry for the grant.

Now Gentry would like to make his system many times faster and optimize it in other ways, and he would also like to think up whole new cryptography methods. But at the end of the day, theory is only so interesting.

“For FHE, I really would like to make it efficient enough so that it actually gets used,” he said.

Here’s the MacArthur Foundation’s video on Gentry and his work: