Google Chairman Eric Schmidt wants to play nice with the European Union, but he isn’t about to give in to calls for regulation.

“Europe needs to accept and embrace disruption. The old ways of doing things need to face competition that forces them to innovate,” he wrote in an op-ed for Digital Minds for a New Europe, the European Commission’s new tech series. “Uber, for example, is shaking up the taxi market — for the good. It offers riders convenience and cheaper fares. Understandably, the incumbent taxi industry is unhappy.”

Europeans have had an uneasy time with technological disruption. European courts officially upheld a “right to be forgotten” law that requires Google to delete some search results if consumers request a takedown. French unions inked a new labor deal with tech companies to limit checking emails after normal work hours, while Germany’s government is looking into a law that could regulate the common business practice.

And, of course, Europe has a love-hate relationship with the politically contentious ride-sharing app, Uber. Brussels has banned Uber. Germany reinstated the car service after briefly banning it. Last summer, there were mass protests across Europe, from London to Madrid, against Uber.

Schmidt blames Europe’s rampant unemployment on the inability to attract investors and innovators. In 2013, Europe’s unemployment rate was climbing above 12 percent, while in the U.S. it was drifting steadily downward below 7.5 percent. “Perhaps Europe’s most pressing problem is its high unemployment rate,” concluded Schmidt. 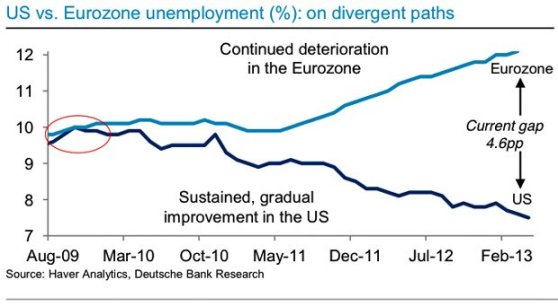 Uber is a fascinating case study in the types of employment that Americans are willing to accept. It’s easy for Uber to attract tens of thousands of new drivers because they’re all on freelance contract. Uber assumes very little liability and there’s no guarantee of wages.

“Uber stands for a particularly extreme form of wage dumping, which refuses to allow for any minimum wage,” said Dieter Schlenker of Germany’s Taxi Deutschland. “We hope that politicians will steer the taxi clearly into the future and won’t let the U.S. firms put any ideas in their heads.”

An economy of contract workers, without regulations or protection, can be both an opportunity and a scary proposition. I asked an Uber driver last week in San Francisco why he switched from driving a taxi. He told me that he makes much more money driving Uber, and he’s glad the company exists. But he worries that the company doesn’t care about drivers. If they get a flat tire or something happens, they’re completely on their own.

Other drivers worry about Uber’s rather strict policy of firing workers who get a series of low ratings from consumers. Europe seems bent on protecting the old world of strong worker protections and regular hours.

Schmidt’s piece was partly in support of a proposed Digital Single Market, which would create standard licensing and legal agreements. Right now, different countries permit access to different services and have a confusing set of laws, making business in Europe difficult.

But, when Schmidt turned to talking innovation generally, he seemed to be implying that Europe must embrace a U.S.-like approach to technology — or suffer unemployment: “If everything stays the same, innovation will be stifled and startups strangled. New businesses promoting new ideas should not be held back by bureaucratic or regulatory hurdles.”