ARM has shipped more than 8 billion of its Cortex-M chips to date. But that may look small compared to the number of chips that it could ship for the Internet of things, or everyday objects that have both computing and connectivity. 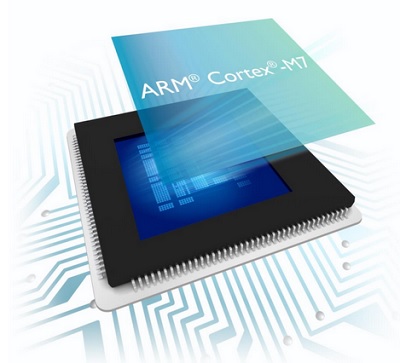 So the Cambridge, England-based chip design firm is unveiling its ARM Cortex-M7 processor design today. With it, ARM hopes to supercharge the brains in Internet-of-things devices, which are embedded in appliances such as refrigerators, drones, and audio speakers. Those devices will be more powerful and have better battery life.

The Cortex-M7 is a processor design that ARM will license to hundreds of companies, which will use the processor in the chips they fabricate for electronic devices. The Cortex-M7 is a 32-bit processor that provides double the compute performance and digital signal processing (DSP) capability of the previous generation of ARM-based microcontrollers.

Thomas Ensergueix, senior product marketing manager in CPU Group at ARM, said in an interview with VentureBeat that the new processor will make all sorts of devices smarter in industrial, infrastructure, sensor, and automotive markets. You can imagine that those chips will be useful in things like Internet-connected self-driving cars, smart coffee makers, better thermostats that can sense when you are home, and factories where alarms go off before machines suffer failures.

“We could only dream of this kind of performance before,” Ensergueix said. “It is a quantum leap forward. We are bringing intelligence to what used to be dumb objects.”

Early licensees of the Cortex-M7 processor include Atmel, Freescale, and ST Microelectronics.

The Cortex-M7 can achieve performance of 5 CoreMark/MHzi, or 2000 Coremarks at 400 megahertz, far above the current performance levels of other chips. The new chips will be built in a range of manufacturing processes, depending on the memory, performance, and cost targets. it uses the same programming model as previous M-series chips, which have been used by 240 licensees in 3,000 chip designs to date. More than 2.9 billion Cortex-M processors shipped in 2013, and there are lots of application developers who know how to program for those devices.

“We have a lot of reuse that makes development much more efficient,” Ensergueix said.

When used in a flying drone, the Cortex-M7 running at 400 megahertz can deliver twice the performance of a previous Cortex-M4 chip running at 168 megahertz. That results in better flight management, including a finer degree of control, accurate speed measurement, finer navigation accuracy, and secure telemetry radio communication.

ARM will compete with rivals such as Intel, Broadcom, and Imagination Technologies.

“We have a massive advantage when it comes to low-power devices,” Ensergueix said. “Intel comes from the PC processor world. The Internet-of-things market is already massively in the Cortex

“The Cortex-M7 is well positioned between Atmel’s Cortex-M based microcontrollers (MCUs) and Cortex-A based microprocessors (MPUs) enabling Atmel to offer an even greater range of processing solutions,” said Reza Kazerounian, senior vice president and general manager of Atmel’s microcontroller business unit. “Customers using the Cortex-M-based MCU will be able to scale up performance and system functionality while keeping the Cortex-M class ease-of-use and maximizing software reuse. We see the ARM Cortex-M7 addressing high-growth markets like Internet of things and wearables as well as automotive and industrial applications that can leverage its performance and power efficiency.” 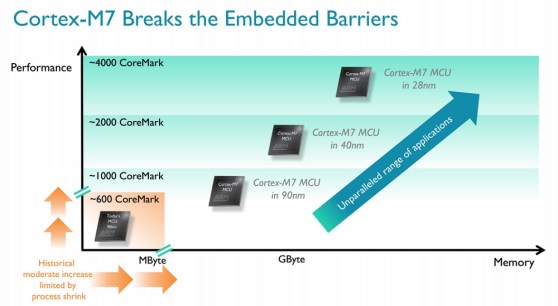 Above: ARM Cortex-M7 chips are a lot faster than predecessors.