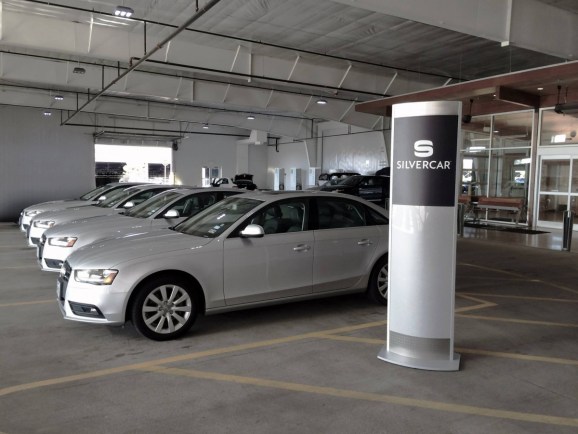 Renting a car at the airport the old-fashioned way is a pain, and Texas-based company Silvercar has been working to fix that.

The company, which announced today that it has raised $14 million in a second round of funding, is using technology to get folks from the baggage claim to the road in as little time as possible.

Silvercar chief executive Luke Schneider has quite a bit of experience in car-rental technology — he was previously the chief technology executive of Zipcar, a rental company known for its tech-based check-in approach. So naturally, Silvercar uses mobile apps, Bluetooth low-energy signal, and other technology it has built in-house to handle the entire customer onboarding process, from reservation, all the way to the drop-off at the airport.

Moreover, Silvercar only provides one kind of car, an Audi A4 in silver, to avoid the mess that too many options can bring. That way, customers can skip the stress of picking out a car, finding the type of car they want unavailable, inventory mishaps, variable pricing due to car types, and so on. It’s also keeping it simple for the company itself in terms of management and maintenance of its fleets.

“We took a page from the Southwest Airlines book — they only fly one kind of plane,” Schneider told VentureBeat in an interview.

Silvercar selected the Audi A4 because it found it worked well for both men and women, because it’s designed with lots of technology that helps the company track its cars better, and because Silvercar has forged a good relationship with Audi and has similar values. And while Silvercar might run special promotions with different cars from time to time, Schneider said it has no plans on moving away from the silver Audi A4 cars.

With its new bags of cash, the company will be expanding to new airports, hoping to add about 10 more in the next 12 months, Schneider said. It’s currently operating in eight airports in the U.S., including San Francisco and Los Angeles. Although Schneider wouldn’t say which exactly, he did say that the next ones will be major U.S. aiports. In 2015, the company should also be breaking even.

More interestingly, however, Silvercar is also exploring possible applications and customers for its technology. Because its technology is entirely proprietary, the company could easily license it out to other companies that would benefit from remote management and monitoring of cars. Again, Schneider wouldn’t share specifics, but it’s easy to imagine ride-sharing companies like Lyft, Uber, and SideCar, car rental companies such as Breeze (for Lyft/Uber/SideCar drivers) and Getaround, and even old-school rental companies like Hertz, all using Silvercar’s technology for their cars.

Eduardo Saverin and Velos Partners led the round, with additional participation from Austin Ventures. Raj Ganguly of Velos Partners will be joining Silvercar’s board of directors as part of the investment.

Silvercar was founded in 2012 by Todd Belveal and Bill Diffenderffer and is based in Austin, Texas. The company previously raised a total of $17.5 million in funding from its seed and first institutional rounds of funding.