Companies that need to recruit top-quality people have another toolset today. San Francisco-based Lever is launching its new platform for hiring and talent management, along with announcing that it has landed $10 million.

“Hiring is pretty broken but more important than ever,” CEO and co-founder Sarah Nahm told VentureBeat. The platform is emerging from a private beta phase and has “about 200 customers,” including Box, Foursquare, GitHub, Lyft, Quora, and Reddit.

She mentioned one company’s HR department that would “stay up to 3 a.m., using email [to share information with the decision-makers], PowerPoint, and a spreadsheet.”

In place of multiple tools, Rahm said Lever integrates those needs into a collaborative environment. Of course, other companies have also targeted this market.

“This space is fragmented,” Nahm said, pointing to Taleo, SuccessFactors, Workday‘s hiring module, Resumator, and others.

“They’ve solved the [unified] database problem,” she said, but “we’re the only one that is focused on collaboration and bringing social experiences to hiring.”

Lever’s platform, she said, “is focused on the needs of people that go beyond the vertical [needs] of HR.” The company’s applicant-tracking system includes, for example, contacts with employees, a way to organize feedback from interviews, and the capability to share questions or comments from the hiring team. Social feeds are designed to keep managers informed of recruiters’ activities, and decision-making is intended to work like a conversation.

“Great hiring has always been collaborative,” she said, adding that Lever’s “core differentiator is better relationships.” 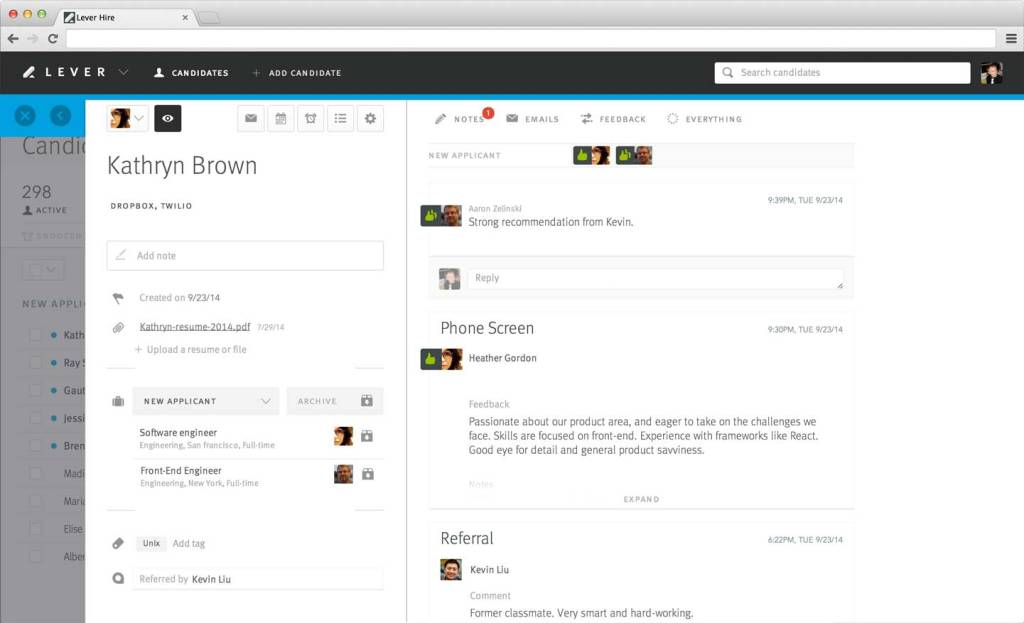 Above: A candidate profile screen in Lever.

The new Series A funding from Matrix Partners will mostly go toward product development, she said, including creation of a mobile app — it has a mobile web app right now — as well as extending the applicant tracking system. A previous seed round netted $2.5 million from Y Combinator and such investors as Marissa Mayer of Yahoo and Aaron Levie of Box.

Lever’s funding is only the latest in a series of recent investments in this space. Work4 raised $7 million in April, Jibe scored $20 million in May, and Resumator got $15 million in August.