The U.S. Senate failed to pass any sort of patent reform legislation this year, despite support from small business owners and both political parties. That includes a Senate bill authored by Cornyn that focused specifically on reforming the litigation process involved with patent lawsuits.

Officially called the Patent Abuse Reduction Act (PARA), the bill would have made it more difficult for predatory companies to sue smaller companies over frivolous patent infringement claims. More specifically, the bill deals with patent holders that threaten legal action if the matter isn’t settled out of court for a substantial amount of money.

“I don’t think we’re ever going to end [the business of patent litigation], but what we can do is close some of the gaps … loopholes that allow for frivolous patent suits,” Cornyn told VentureBeat in an interview after a patent reform panel at Austin Startup Week. He added that this doesn’t apply to all patent holders, saying: “I firmly believe people have a right to litigate, and should, on patents that add value [when infringement occurs.]”

“Frivolous” litigation often occurs when dealing with software patents. For instance, Amazon has a patent on “1-click,” or being able to click a button to pay for items via an online shopping cart. Plenty of other simple-stupid patents exist for things that are so basic or broad that anyone claiming to own the idea behind it seems silly. Yet that’s what’s happening — and for some, it can be very lucrative. 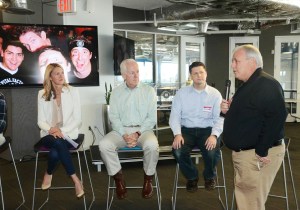 Above: Sen. John Cornyn (R-TX) and Rackspace VP of intellectual property Van Lindberg participating in a panel about the state of patent reform with other business leaders.

“We have a free app in the app store and [someone] sued us for millions of dollars because they said their patent covered ‘rotating a cellphone app,'” said Rackspace VP of intellectual property Van Lindberg, who participated in the panel with Sen. Cornyn. “Well, we called them up and said this is completely bogus and we’re going to fight it. And before we could even get the words out of our mouths, they followed up to say ‘… and we’ll go away for $70,000.'”

Lindberg said the company was happy to fight the suit, which came from Rotatable, even if it ended up costing more than settling out of court. Fortunately, Rackspace not only won that case, but had Rotatable’s patent invalidated as of last week, according to Lindberg. This means that the 50 other companies that were caught up in patent litigation with Rotatable are now off the hook.

But not every patent fight has a happy ending because so many infringement cases go after those without the resources to wage a legal battle.

“More than half of patent litigation last year targeted small businesses, or businesses with less than $10 million in revenue,” Lindberg said. “So these patent trolls are moving down the ladder, and it will continue until new legislation is passed to prevent it.”

Sen. Cornyn told me that raising awareness about this issue is perhaps the only way to get new legislation passed. Yet that’s difficult to do — short of contacting your local elected official — because those that abuse the current patent system for financial gain through litigation often settle disputes out of court. And that means the other party involved (usually) is not allowed to comment on the patent infringement claims as part of the settlement’s terms and conditions. Still, with broad support across party lines it’s reasonable to think patent litigation reform could happen in 2015.

So why is it taking Congress so long to act?

“You know, believe it or not, it all comes down to politics,” Cornyn told me, half joking, half serious. While the House passed a similar version of PARA earlier in the year, Senate leaders decided not to bring the legislation to the floor for a vote back in June, essentially killing it until 2015, which is when Cornyn plans to try once again.