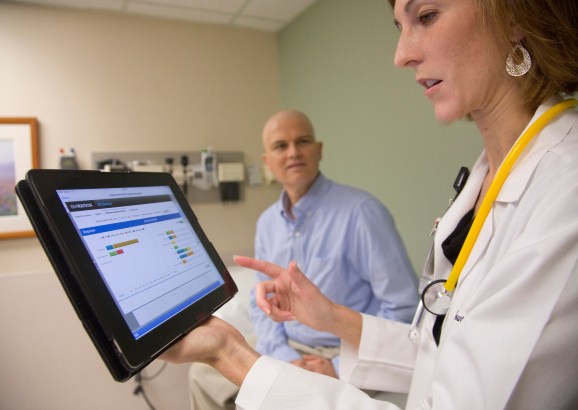 Technology giant IBM has been talking about the value of its Watson software, which processes great quantities of text and then provides answers to people’s questions on the fly, for many industries, including media, mining, retail, and security. But its most visible, useful application for millions of people could lie in health care.

If IBMers are to believed, Watson provides doctors with valuable help in caring for their patients.

“Watson becomes the assistant to the physician, helping them uncover and discover new possibilities locked away in the information, and I think that’s the game changer,” Steve Gold, chief marketing officer at IBM’s Watson Group, said in an interview with VentureBeat.

But the potential for Watson extends beyond the examination room. That’s because an increasing number of startups are counting on Watson to explore large piles of information to provide useful health suggestions in applications consumers can use on their own.

Altogether, in adding big-data firepower to doctors and standalone apps, Watson could lead to the improvement of people’s health. And that’s cool.

Consider, for instance, the difference Watson made for one of Dr. Courtney DiNardo’s leukemia patients at the University of Texas MD Anderson Cancer Center, which has been running a Watson pilot.

The patient developed tumor lysis syndrome, and Watson informed DiNardo about it before she discovered it herself.

“In that particular case, without Watson, the majority of physicians, let alone oncologists — even specialists — would have likely missed the key dynamics of that patient’s case, which, left unchecked, would have resulted in multiple organ failure and likely death,” Gold said. “This is exactly the vision we have for Watson — the ability to enhance, scale, and accelerate human expertise.”

As for DiNardo, she believes Watson could have far greater impact in the years to come. She wrote about Watson in a blog post last year:

In the future, I expect this technology to help us discover new and better treatments for specific genetic abnormalities or associations of genetic changes. It will be able to help us evaluate rare or complex patient conditions and identify drugs that have already been approved for other uses that might also help in the situations we’re dealing with.

Naturally, IBM is signing up more and more partners to demonstrate Watson’s power.

The Baylor College of Medicine and the New York Genome Center have started using one Watson application, the Discovery Advisor for surfacing patterns and connections, even when users don’t know what questions to ask.

And earlier this month, IBM announced that Bumrungrad International Hospital in Thailand will use Watson-based technology, which IBM developed in collaboration with New York’s Memorial Sloan Kettering Cancer Center, to improve the way it cares for people with cancer.

The Watson for Oncology software draws on patient information, medical research, knowledge from Memorial Sloan Kettering, and other data to determine the best possible treatments for patients.

Oncologists at Memorial Sloan Kettering have worked with the technology in such a way that it helps them “identify treatment options that aren’t necessarily well-surfaced through conventional means,” Gold said. While the hospital hasn’t released any official reports on its experience with Watson, José Baselga, its physician-in-chief and chief medical officer, has spoken highly of the potential.

“Through natural-language processing and through learning medical language, Watson, together with algorithms and together with guidelines, begins to learn the process and begins to provide recommendations that then our experts vet, and they further teach the system, and the system continues to improve over time, and now it’s ready to provide real recommendations in a very short time,” Baselga said at an IBM event this month.

A startup called GenieMD uses Watson to ensure that its mobile app, which can track the health of people’s family members, can provide highly customized answers to questions based on the latest available information.

Then there’s genetic-testing startup Pathway Genomics, which does genetic testing with saliva samples. With Watson’s help, Pathway will be able to determine if people have predispositions to certain illnesses.

Pathway provides up-to-date details on “the state of that disease and what we can do about it,” said Gold, who is also the vice president of partner programs and venture capital investments at the Watson Group.

And you can’t overlook Welltok, which is building services to answer people’s questions about their own health and to make suggestions for them.

“Watson will learn which itineraries or rewards are most successful in helping consumers reach health goals and refine recommendations accordingly,” Welltok said in a statement earlier this year covering its Watson integration.

If these new services take off, it’d be great for IBM — whose Watson Group, no surprise, invested in Welltok. Welltok could put a human, accessible face on Watson, which could help Watson’s chances of success, which in turn could give people better care.

After all, having information at your disposal doesn’t necessarily work wonders for your health. If Watson does what its marketers hint at, it might even do better at taking care of you than you can.

“Without Watson, I can’t actually put meaning to available information in a way that’s actionable to me as a consumer,” Gold said.