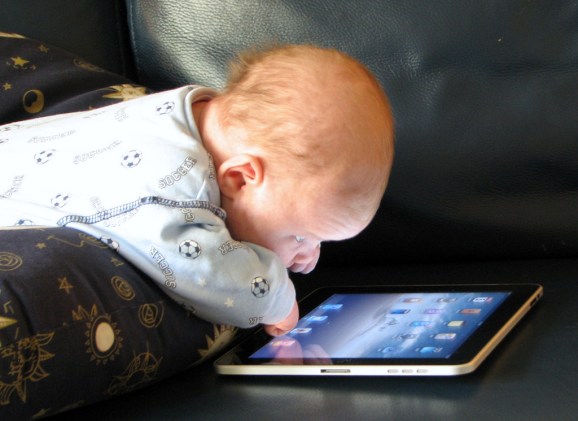 As Apple prepares to stage its latest product-palooza today, there’s a lot of drama and anxiety surrounding the iPad.

The company is expected to debut a new iPad Air 2 and iPad mini 3. Many of the features, such as Touch ID and a burst camera mode, are already known. And we can expect the usual improvements in camera quality and processor speed. It seems less likely that we’ll see the rumored larger iPad today.

When the new iPads arrive in stores, they will likely spur sales for the holiday quarter, and possibly the first quarter of 2015. And then sales will slow dramatically over the next few months, as they have the last couple of years.

This apparent plateau in consumer interest in the iPad has come as a shock to many, and some see it a failing. As the event today gets underway, we’re seeing lots of discussion about the future of the iPad and whether it can be saved.

The company is certainly doing its darndest to get more iPads into businesses. And it continues to improve the two fundamental versions. Apple also says it absolutely wants the iPad to do better yet knows that tablets as a category have hit a bit of a wall.

“iPad sales met our expectations, but we realized they didn’t meet many of yours,” Apple chief executive Tim Cook said during the company’s third quarter earnings call. “For example IDC’s latest estimate indicates a 5% overall decline in the U.S. tablet market as well as a decline in the Western European tablet market in the June quarter.”

But really, I’m not sure there’s much Apple can do to send sales skyrocketing again. More importantly, I don’t think it really matters. And the reasons, I think, point to how Apple continues to evolve as a company.

First, one of Apple’s defenses of iPad sales is more than just bad corporate spin. Cook, in that same call, and in previous calls, has pointed out that most of the iPads the company sells now are to new buyers.

“Our own data indicates that more than half of customers purchasing an iPad are buying their very first iPad,” Cook said.

That means that while sales growth may be slowing, the universe of people who own and use an iPad continues to expand.

My iPad 2 works quite well, and I’m in no hurry to replace it. At home, while we have the usual array of gaming and social apps on it, I would say 80% of our use involves watching Netflix or Hulu.

I’m well aware that the iPad Air was a big improvement. It just wasn’t better or different enough for me to shell out a few hundred bucks when I didn’t need a replacement for something that has largely become a video streaming device.

Even so, as the universe of Apple customers expands, and the number of Apple gadgets they own expands, the company is seeing the impact in another part of its business: The company’s fastest growing category item so far in 2014 is not any piece of hardware, but its software and services category.

“iTunes billings grew 25% year-over-year in the June quarter and reached an all-time quarterly high, thanks to the very strong results from the App Store,” Cook said. “We’re continuing to invest in our incredible ecosystem, which is a huge asset for Apple and a very important differentiator of our customer experience.”

The continued blockbuster success of the iPhone will also expand that universe and will keep Apple rolling in cash. But I wouldn’t be surprised if the iPhone 6 Plus also took a bite out of iPad mini sales. The same thing happened to the iPad when Apple introduced the mini a couple of years ago. It proved wildly popular, even as the less expensive gadget sliced into its overall iPad revenue.

But, more than any other company I can think of, Apple has always been fearless about cannibalizing its own products. If it thinks it has something better to offer consumers, a bigger iPhone, or a smaller iPad, it doesn’t tie itself in knots worrying about the implications for existing products.

Given the iPad’s historically fast start four years ago, it’s easy to see how expectations for the device could have been wildly overblown. For Apple, though, the slow sales matter less than they would at most companies that are only focused on the bottom line from quarter to quarter.

Apple knows people are out there using iPads and downloading stuff to them, and that’s just fine.

And so, when Cook takes the stage today at the Apple Campus in Cupertino to talk about the new iPads, there will be far less at stake for the company’s future than the breathless and hysterical coverage and dissection of every word would suggest.