We’re wasting more time than ever watching video, and we’re increasingly doing it online, a new Adobe report has found.

What’s more, “online” no longer means “on a computer” — it increasingly means on a smartphone, a game console, or a set-top box like a Roku or Amazon Fire TV.

People on the Internet watched 38.2 billion free videos online in the second quarter of 2014, a remarkable 43 percent jump over the same quarter a year ago. Almost three-fifths of those videos were viewed on smartphones. 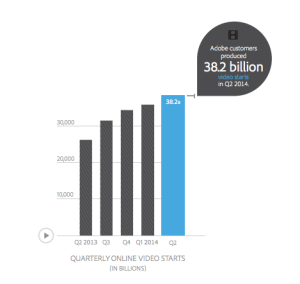 Above: People watched 38.2 billion online videos in Q2 2014, according to Adobe’s research.

And advertisers spent 25.8 percent more money in the same period, thanks in part to an average of two video ads per free video shown.

It’s not just free videos (like on YouTube and Vimeo) that are picking up on traffic: Adobe found that TV show viewership online — via “authenticated viewing,” or views where someone has signed on via a username and password — has jumped an amazing 388 percent year-over-year, with an 85 percent increase in the number of people watching these shows.

The study is based on data collected from sites using Adobe Analytics and Adobe Primetime, so these figures are only a small slice of the overall Internet video phenomenon. For instance, it’s not clear if video giants YouTube, Hulu, or Netflix are even represented in the study. An Adobe spokesperson told us, “the report encompasses data from over 1,300 media and entertainment properties, including virtually all major ones in the U.S.,” but couldn’t provide specifics on exactly which sites were included.

For more, see the Adobe Digital Index, or check out the full online video report (.pdf).