Sports fans are spending more time in apps using their mobile devices, with time spent in sports apps growing 210 percent from a year ago. That should make the traditional sports TV industry worry, according to new data from Yahoo’s mobile analytics firm Flurry.

Meanwhile, the larger trend from traditional to digital is evident as cable is starting to lose the movies-on-demand market to Internet companies like Netflix, Khalaf said. On top of that, digital television service Hulu has also started taking share from TV. And now sports fans are turning to apps to keep up with scores, trade their fantasy players, and watch game highlights. The subject area is growing so fast that Nielsen and Adobe have teamed up to deliver a new set of audience ratings for online videos and other digital content.

But while mobile has carved into traditional TV viewing, the sports market may prove to be too hard to crack. Teams in Major League Baseball are making multibillion deals with cable companies to broadcast games locally — when the likes of the San Diego Padres (with one winning season in the past seven years) can sign a $1.4 billion deal for broadcasting rights, that’s a sign that cable sports is alive and strong. Even though all major sports leagues offer streaming options, viewers cannot watch local games on any source other than cable, satellite, over-the-air broadcasts. And NFL ratings are sky-high even with the league’s recent problems with domestic violence.

Flurry looked at time spent in apps from August 2013 to August 2014. Overall time spent in 580,000 apps with Flurry Analytics increased 65 percent. But the sports category grew much faster. Football apps grew 250 percent from a year ago — many fans check their fantasy football teams on phones and tablets while watching games on a TV. Sports app fans use apps more than two times the average for all app users.

Khalaf concluded, “The tripling of time spent in sports apps is tough to ignore for teams, content providers, and advertisers. Netflix CEO Reed Hastings believes the Internet is replacing traditional television, apps are replacing channels, and screens are proliferating. While live sports are still cable’s stronghold, if the announcements of last week are any indication, this could be strike three. Keep your eye on the ball.” 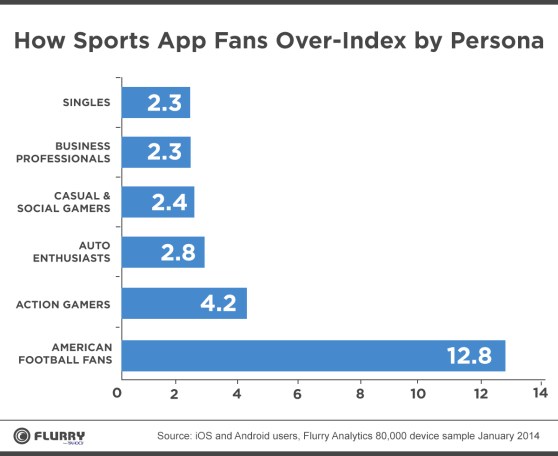 Above: Flurry on sports app fans