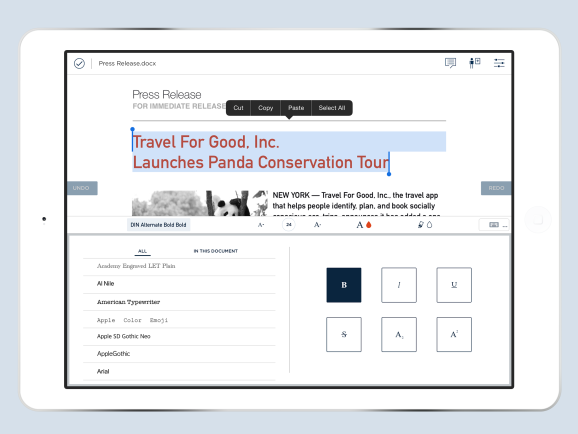 CloudOn, which made its name on its popular virtualization-for-mobile of Microsoft Office, is now transitioning to a new gesture-based document creation tool.

“About two years ago, we realized that productivity for mobile had to be reimagined,” CEO and cofounder Milind Gadekar told VentureBeat.

The new free app launches today for the iPad, and, by the end of this year, for the iPhone. An Android version is under development, and a premium version goes for $3.99.

Any of the approximately one million monthly current users who do not update to the new CloudOn will be allowed to continue with the virtualization product for an indefinite period of time, he said.

The Mountain View, Calif.-based company, which has raised about $26 million in investment funding since its founding in 2009, has been testing the new CloudOn in private beta for the last three months with what it said were “tens of thousands of users.”

“The number one complaint [about the virtualization product] was performance and overall experience,” Gadekar said.

In response, the new product is gesture based and high resolution, designed for small screens and social sharing, and intended to do away with what he called “all that clutter” — the famous Microsoft Office ribbons among them. Unsurprisingly, CloudOn found that “only about 3 percent” of the functionality in, say, Microsoft Word was being employed on mobile devices.

“We’re more compatible with Microsoft Word docs than Google Docs or Apple Pages,” he told us, which translates into “over 98 percent compatibility.”

He also noted that the new app is “cloud agnostic,” with links to Box, Google Drive, iCloud, OneDrive, and others, while Google and Apple favor their clouds.