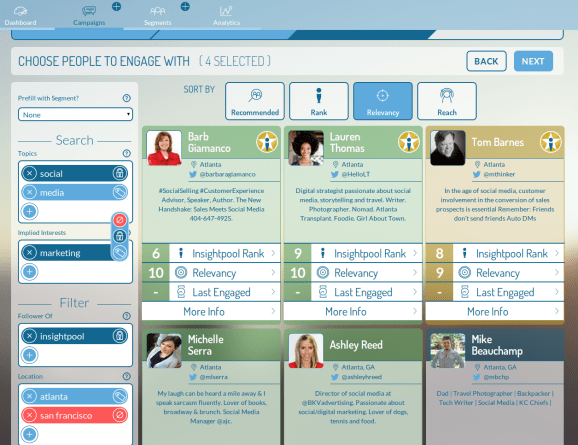 A screen from the new Insightpool

The center of digital marketing has shifted — from figuring out what users have done to predicting what they will do.

To stay in that game, Atlanta-based Insightpool released today its rebuilt-from-the-ground-up version of its audience platform for social media users. The platform integrates with such marketing/sales software as Pardot, Eloqua, or Marketo.

Interpreting public data about self-identified users from Facebook, Twitter, Klout, LinkedIn, and other sources, the latest version is intended to improve the software’s predictive analytics and offer suggestions on what specific actions marketers should take.

Improvements, the company said, were built in part on lessons learned in the platform’s previous incarnation — like discovering a link in a bio meant that the person would be more likely to click on a link than otherwise.

The first version of the platform, CEO Devon Wijesinghe told VentureBeat, found targeted users for a client company “based on their behavior.” Client companies would then manually determine what actions to take.

This version, he said, suggests what methods and actions would best be used to induce certain responses. The newer platform indicates the kind of messaging and its sequence, and then the client creates any content.

An example: The financial institution TransAmerica “had a very specific need to get more people to register for a conference,” which is an action different from, say, watching a webinar.

Because most conferences use hashtags, and webinars often don’t, the platform recommended that hashtags in social communications were an indicator that those users might be more inclined to attend a conference.

As another example, Wijesinghe described how Lego “was trying to drive [interest] up” among targeted users. With the newest platform, he said, the system recommended that an online video would help drive usage.

Analyzing user behavior and defining actions to drive responses is not uncommon among social platforms these days. Wijesinghe pointed to SocialFlow as the most direct competitor.

“Our biggest difference,” Wijesinghe told us, is that SocialFlow “concentrates on timing” — communicating with users at the most optimal time for your audience.

InsightPool, he said, is instead oriented around a client’s specific objectives, such as signing people up for a conference.