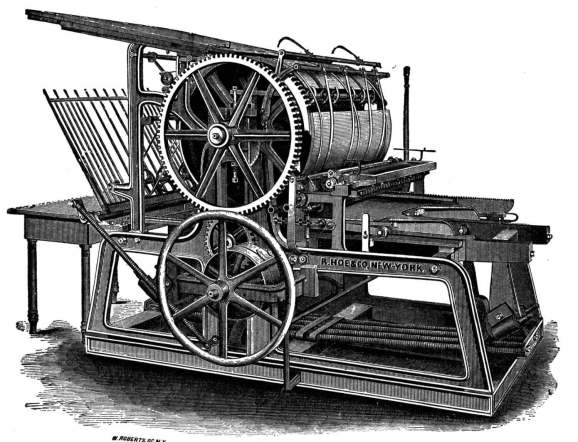 Before the printing press, books were primarily produced in monasteries, copied meticulously, word by word, by the hands of monks. They were things of incredible value, and the only way that humans could scalably spread information.

This scarcity of books had three major side effects:

This world  was one where the totality of human knowledge could be learned by a single person. This small body of knowledge was owned by a small group of people, and largely inaccessible to the rest. When the printing press came along, it completely upended this historically bottlenecked dispersion of knowledge.

The democratization of information

In the world post-printing press, there were no gatekeepers. No traditional institution could control what was, and was not, included in the collective store of human knowledge. The printing press was the first in a line of technologies that democratized the ability to record and spread information. The next would come hundreds of years later, first with desktop publishing, and then with online publishing and social media.

But for this new technology to be useful, a key human behavior had to change: literacy. In order to take advantage of the democratizing of knowledge, the entire population of the globe had to learn to read. This took a long time. At the invention of the printing press, approximately 2% of the population could read, it took 400 years for that rate to hit 90% in 1900. Technologies can be invented in decades. Human behavior changes take centuries.

Information is no longer scarce. In fact, it’s quite the opposite, most of us are drowning in information. The internet places the bulk of human knowledge at our fingertips. And on top of the written word, we have a brand new source of information — data.

In the past, collecting data was an arduous process. Imagine Galileo recording his observations with a quill and ink! Because of the scarcity of data, analysis was used exclusively by doctors, scientists, and mathematicians, and only on the toughest of problems.

But this is changing. The abundance of data combined with the evolution of analytics tools is creating a kind of post-printing press world of opportunity. Data collection, storage, and processing are getting both cheaper and easier by orders of magnitude. Like the printing press, these technologies are taking the fundamental human process of discovery from the hands of the few and giving it to the masses.

At RJMetrics, we’re participating in this development. Our goal is to give every business access to the analytical tools historically used by only the biggest companies in the world. To do that, we’re rebuilding them from the ground up to be 10x faster and 100x cheaper.

But just having access to the tools is not enough. Just as the printing press made books available, but people still had to learn to read, the broad availability of data and analytical tools requires a fundamental change in human behavior. We call this data literacy, and we think that it will be the single most important skill to acquire in the 21st century. Data literacy involves the set of skills – including statistical methods and data manipulation – required to draw conclusions based on raw data.

We believe this new skill will change the world in the same way that literacy transformed access to knowledge in the centuries after the printing press. Instead of trusting someone else’s interpretation of what the data means, we’ll be able to go straight to the source. Instead of waiting on directives from the head-honcho, employees will analyze the data to find the best course of action. Instead of making decisions based on passionate opinion, we’ll value curiosity and intellectual honesty.

But there’s a long way between this future and where we are today. What needs to take place to make this change possible?

I can see these trends begin to happen because they are not only being borne out in our own company, they are happening at every one of the innovative companies we work with. Watching a change of this magnitude happen in real time is exciting. We’re proud to be a part of it.

This is the first post in a multi-post series on data literacy contributed by Robert J. Moore. The next post in the series will explore why and how individuals and organizations will pursue data literacy. Robert is the Co-Founder and CEO of RJMetrics, the analytics platform of choice for many of the most innovative businesses on the internet. Learn why companies like Walker & Co., NoMoreRack, and Hootsuite use RJMetrics at rjmetrics.com.