Hubspot, Marketo, and Pardot are leading the latest marketing automation market share numbers from Datanyze, a big data analytics startup that spiders millions of websites for the software-as-service tools and technologies we use. Act-On and Eloqua close out the top five. 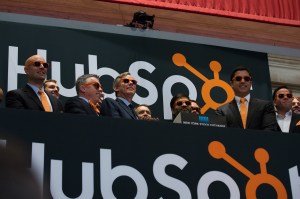 But It’s important to note that these numbers, while they can indicate market share trends, are not hard user or customer counts. Hubspot, for instance, has close to 15,000 actual paying customers.

Looking at the entire universe of Datanyze data across millions of websites, the leaders in users and customers are as follows:

(While Datanyze includes other solutions in its top 10, many of them, such as UberFlip — no, not a customer acquisition strategy by Lyft — are not classical marketing automation systems, so I have omitted them.)

We’re studying mobile app marketing automation for VB Insight
Answer our survey, and we’ll share the data with you.

Marketo, Pardot, Eloqua, and all the other systems also have more paying users than Datanyze reports, either because the systems are hidden from Datanyze’ searching, or they’re on websites that Datanyze is not checking. In addition, a company that is demoing a particular software — for instance, Eloqua — might end that demo and then look like a lost customer.

The data compares fairly well to another view of the market: number of solutions being evaluated on TrustRadius, a crowdsourced enterprise software ratings site. As VP Bertrand Hazard shared with me yesterday, Hubspot, Pardot, Marketo, Act-On, and Eloqua are also leaders here. 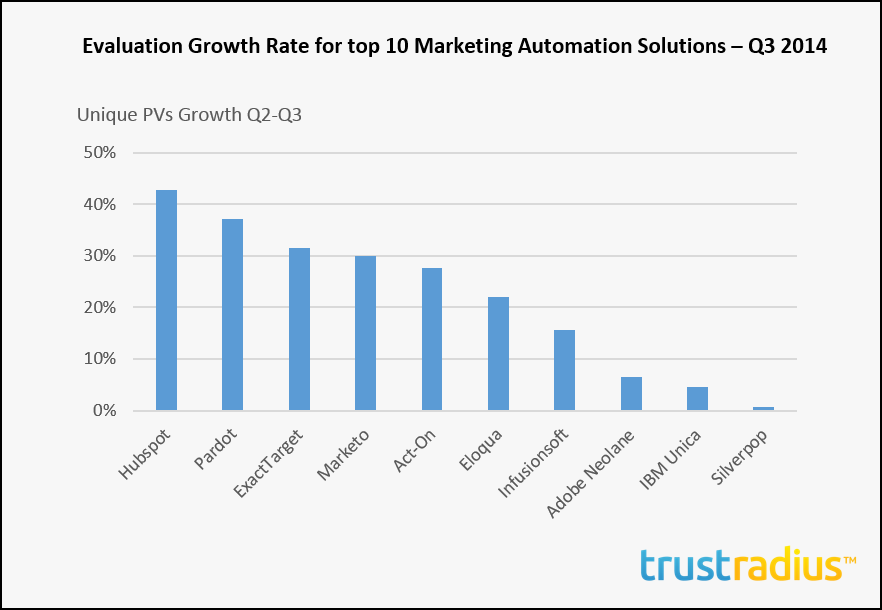 Interesting, TrustRadius notes that ExactTarget — which has traditionally been email-focused but has expanded tremendously in the past year — is fourth. Both Pardot and ExactTarget, of course, are owned by SalesForce.

To see enterprise leaders, you need to reduce the scope on Datanyze’ data down to the top 1,000 or 10,000 websites on the planet, as determined by Alexa.

There, Marketo takes top honors, followed by Eloqua and Pardot. Marketo, in fact, is the only marketing automation tool present on a top-100 website property … an impressive feat, given that most marketing automation systems have no hope of handling the huge traffic flow on massive sites like these.

In addition, smaller systems that are installed on very tiny sites for 1-5 person companies, like SalesFusion, go under-reported in surveys like these.

“Our target market is very small businesses,” InfusionSoft’s senior director of communications Rebecca Sprynczynatyk told me last time I checked with her. “So when we look at the market share data it under-reports us by a factor of 10 — we have over 21,000 customers.”

Checking Datanyze’s customer migration numbers, it’s clear that Act-On, Pardot, and Marketo are continuing to aggressively add customers and users, as is — of course — Hubspot.