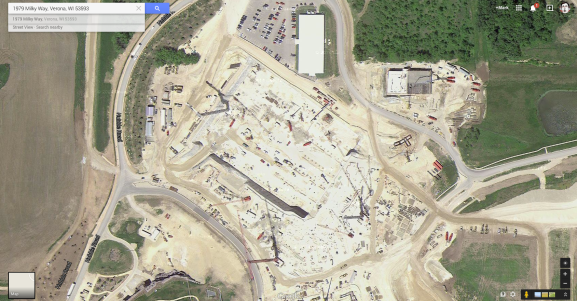 The large construction site where Epic is building its new data center.

The decision to offer “remote hosting” services represents a major change in approach for Epic, which has made a business of selling and installing EHR systems that run on the premises of its health provider customers. It brings Epic one big step closer to offering a “software as a service” (SaaS) solution, which some of its competitors already offer.

Epic CEO Judy Faulkner has said that the remote hosting service will be offered first to new customers but will be extended to existing customers later, two industry sources with knowledge of the matter told VentureBeat.

“While our ‘cloud’ actually lives in a state-of-the-art underground data center, it provides the same benefits — allowing a flexible future for our customers who may seek a cost-effective alternative to internal investments in infrastructure and technology,” Martin wrote.

The new service will initially be targeted at medical groups and small hospitals, which are feeling the pinch of declining Medicare reimbursements and are looking for ways to cut overhead. One way is by eliminating the need to operate their own Epic system onsite.

“Instead, it will be accessed over wide-area networks — the Internet — via secure transmission,” our source says in an email to VentureBeat. “It lets the customer focus on the clinical operations, and Epic does all the IT platform work.”

The new data center is not operational now but will begin hosting the Epic software and patient records for clients in early 2015, one of the sources said.

While Epic won’t immediately offer the full system-hosting service to large hospitals, it may offer to store backup copies of their patient records in its data center for things like disaster recovery, one source says.

The company has been criticized for being slow to move to newer programming languages and systems architectures, but the move to hosted services may change that. The company has also been criticized for not doing enough to enable the sharing of clinical data between facilities using different systems. However, the new hosted model isn’t likely to change Epic’s approach to integrating with other systems.

Kansas City, Mo.-based Cerner, perhaps Epic’s biggest competitor, has been offering remote hosting services since 1999. But Cerner also goes a step further to offer certain customers a full SaaS solution in which it serves a single instance of the EHR software to multiple clients and controls the patching and upgrade schedules.

Cerner targets community hospitals with the service, because they in particular are challenged to hire and retain the database programmers, system administrators, and network engineers needed to run an EHR system on the premises. The client’s decision to buy a hosted or SaaS solution depends on how much autonomy (and IT talent) it wishes to maintain onsite.

In either scenario, the software provider delivers both the software application and the clinical data down to the client via a wide-area network. The provider typically leases dedicated telecommunications lines from companies like AT&T or Verizon to connect to the client with minimal downtime.

Epic is likely to spend 2015 mastering its new hosted services business. But Epic, too, serves community hospitals and networks, and it may be tempted to offer a full-blown cloud service in the future.